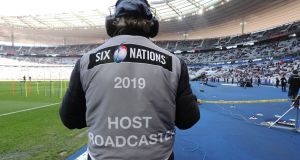 Private equity company CVC, which has bought a 27 per cent stake in the Premiership and the Guinness Pro14 for £320 million (€378 million), approached the Six Nations last year. Photograph: Billy Stickland/Inpho

The deal to sell a 15 per cent stake in the Six Nations to the private equity company CVC is being held up over the home unions’ insistence that the tournament should remain live on terrestrial television. Talks over the £300 million (€354 million) agreement are in the final stages, but broadcast rights remains a key sticking point between the two sides.

It is understood the outcome may hinge on whether the two sides can compromise on a hybrid package involving one match per round being screened on subscription television.

CVC, which has bought a 27 per cent stake in the Premiership and the Guinness Pro14 for £320 million (€378 million), approached the Six Nations last year, and the two parties started an exclusive period of negotiation in September. As part of its offer CVC wants control of the tournament’s commercial arm and the right to arrange the next broadcasting deal.

The current agreement with BBC and ITV, which is worth £90 million (€106 million) a year, ends in 2022 and the tender process for the new contract is due to start this month, although the talks with CVC may still be continuing then. For CVC, broadcasting holds the difference between a healthy return on the £300 million investment and a modest one.

“We have not set a deadline,” said Benjamin Morel, the Six Nations chief executive, “but I would expect that we will reach a decision within a matter of weeks rather than months. The talks have been constructive, but negotiations like this take time because there are a number of complicated issues to deal with. We are always looking at ways of attracting investment, but it is important that we retain control.”

The Six Nations is on Group B of the British government’s listed sporting events for broadcasting, which guarantees free-to-air broadcasters secondary rights. The home unions have resisted attempts to have it upgraded to Group A, which would put it out of reach of pay TV, arguing that doing so would drive down the price.

At last year’s tournament launch Morel expressed his support for it remaining on what he called “free-to-view” television. A few weeks later, the match between Wales and England in Cardiff attracted a peak audience of nearly nine million on the BBC, almost half the available television audience.

The home unions are concerned that if the BBC and ITV lost the contract to a subscription rival, the subsequent drop in the sport’s profile would not be worth the extra money generated.

CVC will be loath to leave the Six Nations with the power of veto over the TV contract, but taking all the matches away from free-to-air would lead to a public outcry and put pressure on the government to add the tournament to the Group A list.

CVC wants to aggregate the commercial rights of the six unions, bundling November internationals and the Six Nations together to achieve a maximum return. It would involve making the July and November Test windows more than a series of friendlies that have no competitive meaning beyond world ranking positions, but the Six Nations would be the most valuable property for sale.

CVC has been linked with Amazon, which screened all the Premier League matches on Boxing Day in a bid to drive subscriptions for its Prime service. It worked, but a leading sports lawyer believes it would be difficult to tempt Amazon into rugby unless the game adopted a more global outlook.

“I think they would want something that involved countries like the United States and Japan, but rugby does not have football’s reach,” said Richard Cramer, the managing partner at Front Row Legal. “They [CVC] will need to be involved for the long haul for meaningful change to happen.”