CJ Stander stands up to the flak: ‘I have always got a point to prove’ 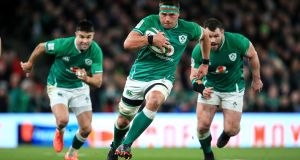 It’s time to talk about CJ.

The presence of the Munster backrower in the Irish team seems to be bothering some people.

“Stander is lucky to be there,” Matt Williams declared to viewers on Virgin Media TV before last Saturday’s game, and he clearly isn’t alone in holding that viewpoint.

Although the calls for Jack Conan wilted with his unfortunate injury, amid the increasingly angry take on Ireland’s World Cup campaign, Stander was one of admittedly many who came in for criticism and, seemingly, the residual antipathy remains.

Yet his performances and his numbers stand up to the closest scrutiny. As indestructible and indefatigable as ever, Stander has completed 80 minutes in 21 of his last 22 Test starts, and only James Ryan (376 minutes) had more game time for Ireland in Japan than Stander (374).

Stander made the second most tackles (53, with two missed) of any Irish player behind only Josh van der Flier (55), while Ryan made 44 with one missed. Stander beat more defenders (eight), made more offloads (four) than Ryan, and, of course, made the most carries of any Irish player with 74 (Ryan had 51).

Needless to say, such is the quality as well as the quantity of Ryan’s work, no one is calling for his omission. That would be ridiculous. Not so CJ.

Yet only Beauden Barrett made more carries at RWC 19, and only Billy Vunipola, who played a game more, made as many in the entire tournament. In other respects too, Stander’s numbers stand up favourably with the English number eight, on both sides of the ball, and those of Kieran Read.

Cue yet another Man of the Match performance last Saturday, culminating in a vital third turnover near the Irish line.

A point to prove?

“I have always got a point to prove,” he said with a smile when meeting with the media this week. “It is just the way of the game. If you have one or two bad appearances or one or two bad moments in a game then people suddenly ask for you to be axed and to be out of the door. You get told you are getting old.

“I see someone called me fat as well during the week,” he said with a good-natured chuckle, although he maintains he’s remained the same jersey size.

Clearly, though, the criticism does sting a little, and did for his wife, Jean-Marie, who gave birth to their first child, daughter Everli, in August.

In response to the media criticism of Ireland’s quarter-final defeat by New Zealand, Jean-Marie, who is the sister of South African Olympic gold-medal swimmer Ryk Neethling, took to social media in writing: “I find the media reaction from ‘our very own’ quite disrespectful . . . talk about kicking someone when they’re down.”

She is a strong woman. I think she handled it well. She can stand up for herself. She didn’t study law for nothing

Contacted by one media outlet in light of those comments, Jean-Marie said: “The players gave their all, had to sacrifice everything. And to have a beating from the media, it’s just sad. They now have to come back and if that was me, I would be dreading coming back to Ireland.”

On returning to Limerick, it was people feeling sorry for him in the streets post-World Cup which alerted Stander, but it was discovering the response to his wife on social media which understandably upset him more.

“For me that is tough because I believe that if you are tough enough to take on a man’s wife and you can’t do it in front of him, then,” he said, pausing, “there is a line there that you step over. That might be my South African side coming through. But that raises a hair on my neck.”

Asked if the abuse on social media occurred during the World Cup, Stander said: “My wife was trying to hide it but when I got back [from Japan] I saw that it impacted [her] a little bit. But she is a strong woman. I think she handled it well. She can stand up for herself. She didn’t study law for nothing. She is a tough one. That is why I like her!”

No less than Bundee Aki and other project players, Stander seems to cop more flak than most, although presumably no one was complaining when they combined for his try against England at Twickenham on Ireland’s St Patrick’s Day, Grand Slam coronation.

He understands that goes with the territory, so to speak.

“It is a tough one because I think it is a split vote about the project player. I think it is 50-50. You get it from some people who don’t approve of it and that’s fine. I’ve said this before, that’s their opinion.”

Interestingly, he admits it’s something he and Aki have discussed.

“Yeah, didn’t Bundee get a lot of flak as well? So we have talked about it. It’s something that we take in and then, again, when guys perform on the pitch like Bundee did at the weekend, then you look at it again and just laugh at it on a Sunday morning.”

That means a lot to the team when people put their bodies on the line. That’s perfect for us

None of this revealing topic matter – which left him a little uneasy afterwards – was raised by Stander himself, and none of it added to his motivation last Saturday.

“It was the first Six Nations game and I have played in it for the last five years,” said Stander, who has missed just two of 21 Championship games. “My wife was there, and my baby, and I just wanted to go out and play it. It stays level. I just want to be consistent and [do] my job.”

One of the day’s abiding memories was the sight of Stander smiling when winning that vital late penalty, when the whistle and Peter O’Mahony’s bear hug had told him the decision had gone Ireland’s way.

They’re the moments. “It was a good feeling.”

Digging in for a win, he said, had echoes of Paris two years ago.

“It bodes well for the team,” he said. “That means a lot to the team when people put their bodies on the line. That’s perfect for us.”

Then again, when asked, he had no problems admitting that Wales frighten him.

“Yeah, they do. Grand Slam winners and we played them over there last year and they brought a physical game. They are a well-drilled team and play with a bit of width and they are physical.”

Right down Stander’s path. Ireland are lucky to have him.