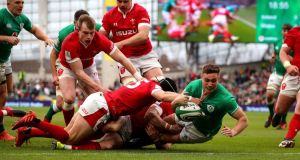 When scrum coach John Fogarty was asked at the captains’ run on Friday what threat Wales held, he referenced coach Wayne Pivac and his Scarlets team of old and the way they could play with real width. Fogarty feared a Welsh team that would play that way with Josh Adams, Leigh Halfpenny and George North running at Ireland.

If anything, in today’s 24-14 win for the home side it was Ireland that showed Wales that when they get the ball into wide channels they are a serious threat. Almost every play around fullback Jordan Larmour, and Irish wingers Jacob Stockdale and Andrew Conway, shot the Welsh defence with panic.

It took just 48 seconds for Stockdale to run and chip to gain Ireland a five yard scrum. Minutes later a right to left phase saw Larmour put Stockdale away and again up-charging the Irish attack was a refreshing glimpse of Irish potential.

With Robbie Henshaw, in particular, effectively punching through the middle for small gains before he left for a HIA, Wales were being pulled in narrow to defend, which gave the wide Irish players comfort to run.

Stockdale, again down the left, scattered Wales before Larmour bagged his try. There were four pairs of Welsh hands on the Irish fullback before he crossed over which will make for an uncomfortable video session next week.

The point is Larmour was given opportunity and Ireland did not choose to punch, punch, punch up the middle as they have been prone to doing in the past. Conway was wide of Larmour had he chosen to pass.

Even when Conway was deep with the ball he conjured up menace and threat. On the half hour his run and chip kick led to a Welsh lineout five metres out and a knock on from scrumhalf Tomos Williams. Tadhg Furlong’s try came from this sequence of play.

For a long stretch in the second half after Ireland had scored from a lineout maul Wales had dominance and territory and it was not until the 64th minute that a Keith Earls sling pass to Larmour triggered a sweeping Irish move. Larmour’s delivery to Stockdale could have been a try scoring pass but was behind the winger who had to check his run.

Ireland then got stuck in a more narrow game of phased play, bumping up the middle until the ball was spun out from John Cooney and made it to Conway in space, who finished it off with Wales defenders sweeping across to the right. Another Irish try.

Hopefully it is the beginning of a pivot away from what seemed to be an Irish cultural bind of refusing to let the ball out and play wide rugby. Maybe Farrell has liberated Irish thinking where they recognise the value of the considerable skill sets of their wide players.

When they watch the replay next week Ireland will see that a growing confidence to use those strike runners whenever they can will pay dividends. Fogarty was right to worry about Welsh width. But Ireland showcased the threat of their own ability to play through hands and that the abilities of Stockdale, Larmour and Conway have not been over stated.

Continue to give them opportunity. Have confidence in what they can offer and they will do as they always do. And that is a significant step forward.