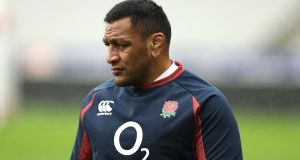 Mako Vunipola returns to the England side for Saturday’s clash with Scotland. Photograph: David Rogers/Getty

Kick-off: 4.45pm. Venue: Murrayfield. How to follow: The Irish Times liveblog will begin at 4.30pm. On TV: Live on Virgin Media One and BBC.

Eddie Jones has made sweeping changes to his starting XV to face Scotland on Saturday, bringing in five new faces including Willi Heinz at scrum-half with Ben Youngs dropped to the bench.

Mako Vunipola comes back into the starting XV at loosehead prop while George Kruis comes in at second row with Lewis Ludlam replacing Courtney Lawes at blindside flanker and Jonathan Joseph getting the nod at outside-centre.

The uncapped duo of Tom Dunn and Ben Earl have also been selected as one of six forwards on the bench, meaning both are in line for a debut but there is no place for Ollie Thorley, who drops out of the matchday squad along with Joe Marler.

Youngs’s relegation to the bench is the most eye-catching change made by Jones given the Leicester scrum-half has been his first choice for the most part of his tenure. Youngs has won 96 caps while Heinz has made just three starts but the former has struggled form of late, performing poorly in the World Cup final and against France last week.

Kruis comes in for Charlie Ewels, who was axed from the squad earlier in the week, while Lawes drops to the bench where he is joined by the fit-again Joe Launchbury. Sam Underhill and Tom Curry stay at blindside flanker and No 8 respectively while George Ford and Owen Farrell continue their 10-12 axis. It means Jones has reverted to a midfield trio of Ford, Farrell and Joseph for the first time since England’s defeat by Scotland at Murrayfield two years ago.

The back three remains unchanged with George Furbank sticking at fullback despite a difficult debut against France. That decision was made easier when Anthony Watson was ruled out on Wednesday while Elliot Daly and Jonny May are again named on the wing.

Dunn has been called into the squad to take his place on the bench after Luke Cowan-Dickie was called away on Thursday morning after his partner went into labour. Also on the bench is Ellis Genge, Will Stuart and Ollie Devoto.

“Scotland are a dangerous side. They like to play with a lot of width and with a lot of flow and tempo in their game,” said Jones. “We want to make sure we dominate the gain line. Their win record against England at Murrayfield is substantially higher than their overall record against us, so we have to recognise they are a dangerous beast and we have to be at our best to beat them.”