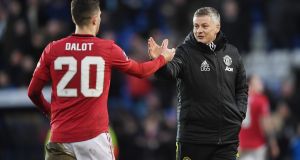 Shrewsbury Town and Liverpool will have to do it all again after the League One side earned a 2-2 draw and with it an FA Cup fourth round replay, as they staged a brilliant comeback at New Meadow yesterday evening. The visitors had moved into 2-0 lead in the early stages of the second-half thanks to an early strike from Curtis Jones and an own goal from Donald Love - however a late brace from former Hibernian striker Jason Cummings earned the Salopians a lucrative replay at Anfield. Elsewhere Manchester United found respite in the mud as they thrashed Tranmere Rovers 6-0 on a terrible pitch at Prenton Park to book their place in the fifth round. Ole Gunnar Solskjaer’s side had endured a tough week but six different goalscorers - Harry Maguire, Diogo Dalot, Jesse Lingard, Phil Jones, Anthony Martial and Mason Greenwood - steadied the ship ahead of Wednesday’s League Cup clash with Manchester City. City are also through after they eased past 10-man Fulham at the Etihad, Pep Guardiola’s side winning 4-0 after Tim Ream’s early red card. The draw for the fifth round will be made at 7.19pm (BBC One) ahead of Arsenal’s clash with Bournemouth on the south coast.

The opening rounds of the Allianz Hurling and Football leagues concluded yesterday, and there were early signs of hope for the Waterford hurlers after they recovered from a slow start to beat Cork 1-24 to 3-17 at Walsh Park. Liam Cahill’s side conceded two early goals before rallying and he was proud of the response shown during his first game in charge: “What a time to give them away - early. That was a real test of the character of the boys to come back, keep the scoreboard ticking over. Keep their heads.” Elsewhere on the day Kilkenny made light work of Richie Leahy’s red card and of Dublin, as they ran out 3-21 to 0-18 in Nowlan Park, while Galway and Clare thrashed Westmeath and Carlow respectively. In the NFL Divison One, Padraic Joyce’sGalway tenure got off to a bright start as they edged Monaghan 1-14 to 0-16 in Salthill, while Tyrone spoiled Meath’s return to the top tier with a 1-14 to 1-9 victory in Omagh. Those games followed a thriller in Croke Park on Saturday night - Dublin and Kerry’s 1-19 to 1-9 draw ensuring the year started with a bang.

1 Dublin council official calls for ban on parents driving children to school
2 Varadkar says Sinn Féin and Fianna Fáil should form coalition
3 Paraic O’Donnell: MS is meticulously destroying me. I am being unmade
4 Mediterranean diet fuels bacteria that may reduce old-age frailty
5 Fianna Fáil remains the only game in town for Sinn Féin
6 Dancing with the Stars has hit Father Ted levels of farce
7 Rape victim verbally abused in courtroom after two men are jailed
8 ‘Exposure doesn’t pay bills’: What artists say about freebie culture
9 Fintan O’Toole: The election was not just political, it was biological
10 Council writes to Taoiseach over white-water rafting comments
11 New IRA planning bomb attack on Sinn Féin member claims Michelle O’Neill
12 ‘My new greatest fear – losing my child – colours everything in the day’
13 Provisional liquidator appointed to Dublin engineering firm
14 Revealed: Where to find Ireland’s best breakfasts and brunches
15 Forget a grand coalition – here is what the next government will most likely look like
16 Everything you need to know about pensions but were afraid to ask
17 Call for Garda to investigate threats to victim of sexual abuse
18 Johnson adviser quits over comments on eugenics and race
19 Former UUP leader: Unionism must realise it is no longer a majority in Northern Ireland
20 Housing is at crisis point – it is time to park ideology and build
21 How can I view my dead brother’s will if I’m not the executor?
22 ‘I won’t be behind the door when it comes to telling people my ability’
23 Indian city builds wall hiding slum ahead of Trump visit
24 Storm Dennis washes abandoned ‘ghost ship’ onto rocks off Co Cork
25 HSE managers cannot ignore parliamentary questions, says Reid
26 Bursting of Tesla bubble a case of ‘not if, but when’
27 Tipping Point: Eddie Jones’s rhetoric is out of place in a febrile political climate
28 A long way from Tipperary to being a judge in Perth
29 Fine Gael: ‘We are preparing to go into Opposition’
30 Ten arrested in immigrant worker search operations
31 Netflix has revealed its most-watched content. You might be surprised
32 “Finding that right balance between work and the rest of your life is the key”
33 Griveaux sex scandal threatens to reshape France’s relationship with Russia
34 Bank of Ireland staff in line for 2.95% pay increase
35 Sinn Féin must try and do a deal with other left parties
36 Welcome to my Place . . . Estepona, Spain
37 School secretary admits she did not pay 520 M50 tolls over three years
38 ‘I’m an emotional wreck’: Dublin man fears council will seize his caravan
39 Magdalene survivor takes case to UN torture committee
40 Robin McBryde: Farrell will be judged on results, not style
Real news has value SUBSCRIBE