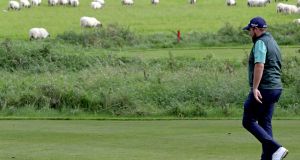 Shane Lowry is the star name in the field at the Irish Open this week. Photograph: Brian Lawless/PA

The 2020 Irish Open belatedly gets underway today, with Shane Lowry the stand out name in action at Galgorm Castle, Ballymena. There is a reduced field of 144 this week and a reduced purse of €1.25 million, with the tournament being played behind closed doors. British Open winner Lowry gets his first round underway at 9.25am alongside George Coetzee and Lucas Herbert, and he will be hoping for a slightly easier test than last week’s US Open. He said: “[Winged Foot] was probably the toughest golf course I have ever played, mentally and draining over the week. I got a good bit of rest the last few days. I’m probably a bit drained but, when it comes to it, I will get out there and the little bit of adrenaline will keep me going.” You can read Philip Reid’s hole-by-hole guide to Galgorm Castle here, while he has also picked out four players to keep an eye out for. You can also follow all four days live via the Irish Times liveblog, with John O’Sullivan teeing off at 9am this morning before Ruaidhrí Croke takes over at the turn.

Arsenal’s resurgence under Mikel Arteta continued last night, as they beat Leicester City 2-0 away from home to progress to the fourth round of the League Cup, thanks to a Christian Fuchs own goal and a late Eddie Nketiah strike. Thiago Silva and Ben Chilwell made their Chelsea debuts in a 6-0 rout of Barnsley which saw Kai Havertz take home the match ball after his hat-trick at Stamford Bridge. Brighton will meet Manchester United after their win over Preston North End, Everton thrashed Fleetwood 5-2 and Newcastle were 7-0 winners away to Morecambe. Elsewhere Dundalk’s European journey continues tonight with the next round of Europa League qualifiers - if Filippo Giovagnoli’s side can beat Moldova’s Sheriff Tiraspol away from home they will be one win away from the group stages (kick-off 7pm).