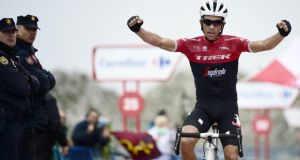 Alberto Contador celebrates as he crosses the finish line. He earns his right to bow out on the summit with the gods. Photograph: Jose Jordan/AFP/Getty Images

And so it arrived on Saturday with Eurosport and “El Infierno”, was splashed across the Spanish newspapers. A short mountain stage in the Tour of Spain, La Vuelta, a cycle race that ends on the feared slopes of the ridiculous, absurd, terrifying L’Angliru.

Note to self: there is a committee man sitting in an office somewhere in Spain dreaming this stuff up.

It is simply a 12.6km chapter from Dante’s Inferno, a brutal climb where at the upper reaches the incline is 24 per cent. The cyclists are off their saddles, they are hardly moving forward and those who are not giving up grind out each metre towards the 1,560m summit with their faces frozen in a painful rictus.

Then coming down it is a bobsleigh run. Made treacherous by the rain, wet leaves, white lines, painted messages, streams of water running from the mountain across the road surface and screaming, excited fans that sometimes don’t know how to get out of the way.

Note to self: isn’t it’s a great lark to run in front of Alberto Contador, grinning like a baboon into an outstretched selfie stick.

The physical parameters set a mood of misery for “The Inferno”, 118 kms snaking around peaks and goat roads with five climbs, all designed to test hearts and minds; a course conceived to break and to cause maximum hurt. And so it did.

Contador, on his last classic race before retirement at 34-years-old, was the rider taken into the bosom of the Spanish crowd.

One of only six riders to have won the Tour de France, Vuelta and Giro d’Italia in their careers, it was his struggle in going for the crown, a final stage win of his career rather than Chris Froome’s struggle to keep the leaders jersey, that held hearts.

How simple was that?

Cutting to a shot of a motorbike outrider tending his wounds on the descent, his bike crumpled against a wall as Eurosport commentator Carlton Kirby observes.

“That will make it more scary for the riders.” We already were scared watching them try to get up the mountain. But down they went, down, down, down.

“It just goes on you,” remarked analyst Seán Kelly after Marc Soler slides across the road on his backside and into a storm drain. “He picked a good place just short of the barrier.”

Minutes later, the camera is misting up and with a hand occasionally coming across the shot to wipe the rain from the lens, Kirby injects with a jolting scream.

The rain lashed and the mountain did its best to chuck them, the sort of conditions in which Kelly, winner of the race in 1988, would have thrived.

“De la Cruz is in the gutter I’m afraid,” says Kirby cutting across a Kelly analysis.

Hurt, discomfort and suffering were the realm of the Irishman. He ruled pain, pushed the barrier out more than anyone. Best with a torn shirt, a road-burned shoulder and maybe a finger or two out, Kelly is cycling commentary ice to Kirby’s fire.

“Allow this man to do what he does,” pleaded Kirby as Contador makes a decisive break, the slowest ever seen. But 30 seconds on the Inferno is a continent of separation.

A kilometre from the summit of and fans crowd in tighter. As Contador turns one of the endless bends he grazes somebody and wobbles. Beside the rider, as the road becomes a dangerous, narrow tunnel of bodies, the Guardia Civil race alongside keeping the hordes back, sometimes successfully, sometimes failing.

“Security are struggling to punch a hole. Everybody wants to witness this,” adds Kirby in a state of heightened anxiety that Contador may be unseated.

The road angle is a diagonal line from the bottom right corner of the television screen to almost the top left.

“The problem is so many people. Contador is the one they have come to see. They are getting a little bit over anxious,” says Kelly in what for the Carrick-on-Suir man ranks as a crescendo of emotion.

The up side is Contador survives his Passion of Christ to win the second last stage of the race. He earns his right to bow out on the summit with the gods.

“What a day, what emotion, Sean?” asks Kirby dangerously trying to coax some effervescence from the legendary man of stone.

“Yeah, what a day,” replies Kelly.

1 John Egan the hero for Sheffield United against Wolves
2 Monica Seles: The warrior queen who could have been the best ever
3 Game Changers: Futuristic views set Herbert Chapman apart
4 Super Rugby AU offers glimpse of rugby’s future if law changes are adopted
5 Rory McIlroy: ‘It sort of sucks going off in the middle of the pack on a Sunday’
Real news has value SUBSCRIBE
Here is your handy guide to sport on television this week