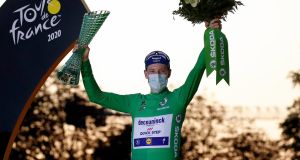 A bulked-up Bryson DeChambeau bashed his way to a six-shot US Open victory overnight, silencing any lingering questions as to whether his brawny game could translate to the major stage. World number nine DeChambeau, who began the day two shots back of US Open debutant Matthew Wolff, clinched his first major title with a mix of jaw-dropping drives and clutch putts, shooting a virtually flawless three-under-par 67 to reach six under for the tournament at Winged Foot. Ireland’s Rory McIlroy finished in a tie for eighth after a disappointing final round of 75, while Shane Lowry finished with a final round 72 for 295 for tied-42nd position. The Offalyman then headed for a flight home, where he will be the headline act in the Dubai Duty Free Irish Open at Galgorm Castle, which starts on Thursday.

Sam Bennett completed a new chapter in Irish sporting history, winning the final stage of the Tour de France racing down the magnificent Champs-Élysées to secure the green jersey. The 29-year-old from Carrick-on-Suir became the first Irish rider to win in Paris, and only the fifth rider in history to win there in the green jersey, which rewards the Tour’s most consistent finisher based on points gained in each stage. Holding back the tears, there was no disguising his pride as he admitted: “if you told me this, three weeks, no, I wouldn’t have believed you. It’s a dream I never really knew I had, because I never thought I’d be good enough to do it, never thought I’d be strong enough to do it.”

1 Two hundred Irish retailers for all your online Christmas shopping
2 Large crowds gather on Dublin’s Grafton Street on eve of lockdown
3 Coronavirus: Three further deaths and 1,066 cases reported in Republic
4 People will need to get used to a ‘simpler life’ because of Covid-19, says prominent medic
5 Galway nursing home sees 26 out of 28 residents test positive for Covid-19
6 Waterford woman accused of sharing pictures of boys who murdered Ana Kriégel
7 Why work more than 15 hours a week?
8 Life under Level 5: Where can I go, who can I see, what is closed and what is open?
9 Lockdown meals: 50 great Irish restaurant food boxes to go
10 Body of woman and baby boy found in separate locations near Lucan
11 Guinness brings out a non-alcoholic version of the black stuff
12 Thousands of gardaí mount checkpoints and patrol parks, beauty spots
13 Level 5 golf shutdown: Ireland one of few countries to close courses
14 Farm lobby seeks EU ban on vegan ‘burger’ and veggie ‘sausage’
15 Gym owner who planned to stay open changes mind after gardaí visit
16 Borat 2: Rudy Giuliani’s trouser-reaching scene is the work of a daring young woman
17 My Irish passport has calmed tempers at borders and airports
18 How long can Government afford to keep State pension age at 66?
19 What will €250,000 buy in Dublin 7 and Co Clare?
20 Dan Martin toasting another stage win at the Vuelta
21 ‘You guys are amazing’: Matt Damon’s message of support to Temple Street children, families and staff
22 Developer’s impeccably restored Fitzwilliam Square Georgian for €3.5m
23 Covid-19 Level 5 support bubbles: Everything you need to know
24 Disappointment and frustration par for the courses as golf goes into lockdown
25 Nearly 400 Brazilians have tested positive for Covid-19 in Ireland, data shows
26 Maxwell denied seeing Epstein involved in ‘inappropriate underage activities’
27 International Dublin Literary Award: Anna Burns becomes first Irish woman to win €100,000 prize
28 Shock at golf clubs as sport faces shutdown in Level 5
29 Taoiseach distances himself from a united Ireland and points to co-operation as way forward
30 Covid-19: Belgium’s foreign minister (45) in intensive care
31 Mystery around Pope Francis’s backing for same-sex civil unions
32 Suzanne Lynch’s US Election Diary: Trump ready to go on the attack over Biden's son in final debate
33 Suzanne Lynch’s US Election Diary: Trump ‘walks out’ of TV interview at White House
34 Calls on Irish MEPs to reject ‘regressive’ CAP proposals in key European Parliament vote
35 'You can’t see the waves coming' - crew describes dramatic rescue of ship off Irish coast
36 Don’t worry about the deficit – the lockdown risk is to jobs
37 These lemon cheesecake bars are a little slice of sunshine
38 Covid-19 restrictions in Europe: how does Ireland compare?
39 Kerry v Donegal brought forward to facilitate marathon journey
40 Frank Fitzgibbon stepping down as Sunday Times editor
Real news has value SUBSCRIBE