Emmet Malone and Keith Duggan reflect on a costly evening for the Republic of Ireland as they lose captain Seamus Coleman to a bad injury in their 0-0 draw with Wales. Video: David Dunne 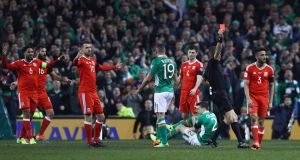 Players react as Neil Taylor of Wales is shown a red card by referee Nicola Rizzoli after a challenge on Republic of Ireland captain Séamus Coleman during the World Cup qualifier at the Aviva Stadium. Photograph: Ian Walton/Getty Images

Fuelled by the loss of so many players, the mood before this game had been a little fearful but there was an element of fury by the end with Séamus Coleman having suffered what Martin O’Neill described as a “bad break” to his right leg after a tackle by Neil Taylor at the end of a second-half spell that resembled something like a one-sided feud.

In terms of their football, the dragons ultimately came, coughed and spluttered and out came some smoke. Their manager had not been wrong when they talked about their passion, though. If only they channelled it here the way they had in France last summer.

Towards the end Gareth Bale gave a glimpse of the brilliance that had characterised his performances back then with the midfielder, powering forward and then letting loose a soaring shot that flew inches wide of the angle. It is hard to imagine how the atmosphere might have deteriorated had it gone in, though, for he should have been off by then with his late flying challenge on John O’Shea meriting red rather than yellow and his recklessly high tackle a few minutes later deserving something from the Italian referee.

Instead, it was Taylor who was dismissed for another really poor tackle on Coleman and his exit clearly changed the game with Ireland, never quite sure until then whether to stick or twist at nil all, going all out for victory in the 17 minutes that remained.

They would not have come close to deserving it based on the balance of play through the opening hour but the Welsh would have had very few complaints that one of the late goalmouth scrambles they had had to endure ended in a winning goal for the locals. James McClean came close with a double effort, the first of which was blocked, the second deflected wide, and for one fleeting moment in the dying seconds Shane Long look set to deliver it from close range but once again it was stopped short of the line.

The crowd were certainly willing the home side to complete the job by then and it must be quite some time since Aiden McGeady’s arrival onto a pitch was so joyously acclaimed. He replaced David Meyler who had in turn stepped in, just minutes before kick-off, for James McCarthy, whose absence at the start had only added to the early sense of foreboding.

Wales started the more brightly and though they couldn’t quite keep their early grip on things, they still managed to play the more composed football a little further up the field that Ireland seemed able to.

We'd like to send our best wishes to Seamus Coleman following his injury this evening. Get well soon, Seamus. #COYBIG pic.twitter.com/kYwcPBAsC0

Bale, repeatedly booed through those opening stages because he was good, rather than bad, which came later, lurked a little menacingly but it was Joe Allen who really pulled the strings for the visitors through the bulk of the first half.

The 27-year-old always looked anxious to get on the ball and tended to use it well to push side forward. Both he and Bale tested the Ireland defence with angled balls into space for Taylor to run on to during the first half an hour. If the wing back had been more alert to the Real Madrid star’s intentions the first time, or his control had been better a little later on, Ireland might have suddenly been in a lot of trouble. But he was not and so Coleman got back on each occasion.

Elsewhere, the home side coped well enough with McClean, wearing number five in honour of Ryan McBride, putting in a shift on the defensive side of things that his friend would have been proud of.

The highlight might have been an early challenge on Bale in which he rather neatly nicked the ball away after covering a lot of ground to get near him but he followed up with a challenge that put paid to a move with potential involving Chris Gunter and Hal Robson-Kanu, and a few minutes later an interception in the centre circle that quickly shifted his side into attack. Later, as Ireland started to exert more pressure, McClean was probably Ireland’s most threatening player too.

Wayne Hennessey was not much troubled through the opening half, though, and at the break Coleman must have thought fancied his side’s chances of taking the extra two points. The first Irish corner didn’t arrive until the 34th minute and apart from the swipe Shane Long made at that, there was nothing much really that stood out in terms of an attempt on goal.

Long, indeed, cut a lonely enough figure for stretches. Ireland’s wide players, McClean and, usually, Jon Walters, spent a lot of time chasing red shirts back and there were quite a few times when those involved in the initial Welsh build-up play, usually Allen and Joe Ledley, found themselves with nine Irish players between them and Darren Randolph. It seemed to work well enough for the locals, who always seemed to have a body on hand to get in the way, but it did not make for much of a spectacle even as, with the second half wearing on, O’Neill’s men seemed to show a little more ambition.

In the end, they got the point they might just have settled for beforehand and are now joint top with Serbia, four points clear of Wales and Austria, who come here in June.

The Welsh will miss Bale for the trip to Belgrade the same day for even the booking here was enough to keep him out of that game but Coleman will surely miss a lot more football than that and between his injury and the team’s inability to get the goal they pressed for late on, this will go down as a bad night for Martin O’Neill side.

1 Ireland’s autumn of discontent continues with abysmal Georgia showing
2 Ireland 23 Georgia 10: How the Irish players rated
3 No fireworks but Limerick get the job done against Galway
4 Jim McGuinness: There is a way to save championship and make it competitive
5 Once in a blue moon: Cavan’s overnight success 15 years in the making
Real news has value SUBSCRIBE
Here is your handy guide to sport on television this week