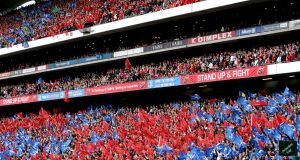 A packed out Croke Park for the Heineken Cup semi-final in 2009. Photograph: Inpho

Following on from the news that an initial 5km travel limit will be in place for those playing on golf’s resumption come May 18th – there is the wait for official protocol to be delivered to clubs later this week on how to implement safety guidelines. Philip Reid explains the majority of members - in rural clubs especially - reside beyond that distance leaving many clubs in the position of waiting to assess the protocols to see if it is worth reopening at all on May 18th, or to wait until the phase two measures on June 8th.

“Dundalk FC and myself have been lied to, stolen from, insulted and disrespected by the FAI,” Dundalk chairman Bill Hulsizer says that he stands over his comments made in an email sent to senior officials at other Airticity League clubs over the weekend. Emmet Malone explains, he appears to favour a complete break by clubs with the association. A parachute payments row is posing a problem for the Premier League’s return, the English Football League is also uncertain what benefit they would receive from the restart of the top flight, if games in the lower leagues were not able to restart at the same time. The German Football League has tested 1,724 players and staff at the 36 first and second tier sides since last Thursday - and 10 have tested positive. The league are building towards a return to action this month subject to government approval.

1 US passengers fly into Dublin: ‘I’m here for six days. I guess I’ll have to stay inside’
2 Quarantine process to be tightened as health officials grow nervous
3 Maureen Dowd: Biden has his limitations but he’s no Trump
4 Keith Duggan: Bubba Wallace tweet shows just how troubled Donald Trump’s mind is
5 Forget bulging muscles; strength is all about nerves
6 Covid-19: Restrictions on travelling abroad may last several years, expert warns
7 Back with our old friends at eir – and nothing seems to have changed
8 Una Mullally: Phoenix Park travesty is a litmus test for the Greens
9 Disease expert says jailing tourists who breach quarantine would send clear message
10 50 best Irish albums of all time – in order
11 Leisure facilities continue to close as Covid-19 magnifies insurance crisis
12 Majority of employees don’t want to return to pre-Covid working patterns
13 Gardaí given guidance on new face mask regulations hours before they become law
14 Anne Enright: ‘Nuala O’Faolain was an impossible person, to whom we owe so much’
15 A whole bowl of Creole – and don’t skimp on the shrimp
16 Dublin has crowd-free weekend as pubs long for July 20th restart
17 Stunning image of comet Neowise captured over Dublin Bay
18 Thandie Newton names names. Will Hollywood punish her?
19 Coronavirus: Cases surge in southern US states as Italy and Germany hold steady
20 Jack Charlton’s own grievances endeared him to Irish fans
21 Mark Lawrenson: Searing honesty defined Jack Charlton
22 Off the charts: why this paint colour is Instagram's favourite
23 Missing the rural pub in lockdown: ‘It was a very important social avenue to me’
24 The things the Taoiseach doesn’t talk about in public
25 My marriage is boring and polite. How do I make my husband interested in me?
26 ‘My rent here is so low it’s a joke’
27 Coronavirus: No new deaths reported but 17 more cases confirmed
28 ‘The beaches are open and people are having a wonderful time’: Why Jaws is still so scary
29 Investors in Irish solar energy fund in line for €20m payout
30 Developer lobbies to rezone Howth Castle land for housing
31 Taoiseach urges British people not to holiday in Ireland at present
32 Coronavirus: Who gets a vaccine first? US considers contentious question of race
33 ‘I set up an investment club many years ago with a bunch of friends’
34 BrainWaveBank raises €1.2m for its ‘Fitbit for the brain’ technology
35 Norwegian airline sued in Dublin by inflight caterer
36 John Bolton on Trump’s presidency: ‘Every day is a new adventure’
37 Maria Steen: ‘Progressive’ views permeate daily life
38 TV View: Proper Irish wake for Big Jack, the man who gave the nation notions
39 Belgium helps Ireland to a Brexit boon
40 Fintan O’Toole: In the US, the 19th century is coming to a very slow end
Real news has value SUBSCRIBE