What next for Cian Healy and Seán O’Brien as Corbisiero walks away? 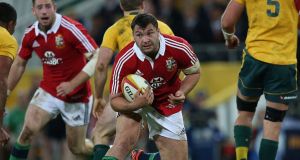 British and Irish Lions prop Alex Corbisiero is taking a break from the game after a decade of physically punishing and mentally draining scrummaging. Photograph: Billy Stickland/Inpho

Alex Corbisiero only made the 2013 British and Irish Lions tour of Australia after Cian Healy was forced home after his ankle ligaments snapped. Seán O’Brien also missed the chance to face the Wallabies as the English prop went on to shine in that victorious third test match.

Three years on and the certain rise of a trio, whose average age is 28, to being considered among the best forwards in the world has been hindered by repetitive and different injuries.

This becomes relevant again as Leinster enter their last game of the regular season this afternoon at home to Treviso without the pair that was supposed to provide the power surge that kept the province among Europe’s elite in 2016 and beyond.

Both are crocked. Again. Corbisiero took the unusual step of temporarily downing tools on his vastly promising rugby career 14 weeks ago – and was subsequently released from his Northampton contract – after a decade of physically punishing and mentally draining scrummaging as a professional loosehead. “Many guys are dependent on their contracts and so they’re careful not to upset their current club or coach,” Corbisiero told The Guardian’s Donald McRae.

“They don’t want to ruffle any feathers. I respect that. If you’re a dad, then family is your priority. But I am sure the kids of that player want him being able to walk around rather than hobbling when he is 50 or getting dementia early.

“I am ready to talk because I want rugby to change. I want us to look after players by talking about it, listening to each other and having a united front. Lots of guys have said to me, off the record: ‘Well done, mate. You’ve done the right thing. I wish I could do the same but I’ve got family, kids, a mortgage and it’s not feasible.’”

Now, as Leinster coach Leo Cullen rightly noted yesterday, Irish-based players are not forced to play 38 matches a season like their English club counterparts. “I would say, roughly, 25 games with around 60 minutes on the field per match is right for a prop,” said Corbisiero who used the NFL as a comparative example to note contact is restricted in training sessions to a couple of times a season.

Cullen was asked yesterday about what McRae describes as a “culture of silence” that sees coaches, and players themselves, heaping pressure on injured bodies to take the field of play (and therefore shaving years off hugely promising careers for short term gain). “The nature of professional sport means there is always a shortterm focus,” said Cullen.

“There is always the big game coming up. Everyone feels that responsibility. Players feel that responsibility on the organisation, on the club, and they want to go out and try to fix the problems or go on and play at the next level. Everyone has that feeling that there is somebody coming up on the inside.

“I totally understand that. Especially in Ireland you have to have an eye on the bigger picture. We have smaller resources so we need to manage those resources very, very carefully.”

The comparison between Corbisiero taking time out to heal injuries while Healy battles on from one injury to the next is presented to Cullen.

“We try to manage the group as best we can. We are very fortunate in Leinster that we have a team of medics and strength and conditioners whose number one focus is the welfare of the players.

“Sometimes a player will say ‘No, I’m fine,’ and want to keep trucking, so it is important that we have those strong medics.”

Corbisiero said while playing English club rugby that “in a grey area, my experience is that the decision leans towards the player playing.”

Isa Nacewa retired for two seasons only to return to Dublin last summer as Leinster captain (after Kevin McLaughlin’s enforced retirement from concussion). “It’s not only the physical freshening up but mentally as well,” said Nacewa. “It can do the body wonders.”

O’Brien’s current problem is a complicated hamstring tear. “Seán had some fibres intact, it wasn’t a complete rupture, like some of the other players [Healy last year] who have had those ruptured hamstrings,” Cullen explained.

“It’s quite a complicated injury so it’s slower than we would have liked.”

“Cian Healy is a very unique individual, a great competitor, and he has been managing himself, carrying a couple of niggles over the last while. We are just trying to manage him as best as possible. To do what’s best for him.”

Luke Fitzgerald’s latest in a long line of injuries is to his medial ligament.

“It’s nothing major. Hopefully he will be available for our next game.”

All these physical problems seem never-ending because when fit the value of these players is so obvious. It has significantly altered where Leinster’s could have been by now. Johnny Sexton noticed as much on his return from Paris.

Alisson denies Man United as Liverpool go four without a win 18:49
Mesut Özil confirms Arsenal exit as he moves to Fenerbahce 17:37
Here is your handy guide to sport on television this week 17:01
Dreal Deal steps up again at Punchestown despite alarming drift in price 16:37
Tanguy Ndombele’s moment of magic caps Spurs win at Sheffield United 18:57
Crossword Get access to over 6,000 interactive crosswords