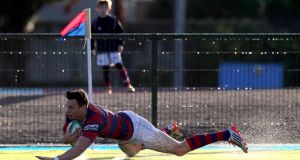 Clontarf maintained their presence at the top of Ulster Bank League Division 1A, holding off a strong second half challenge from Galwegians to run out 16-9 winners at Castle Avenue.

Playing on their new 4G pitch, which was officially opened beforehand by Ireland head coach Joe Schmidt and IRFU President Martin O’Sullivan, Clontarf scored the game’s only try in the first half through strong-running centre Matt D’Arcy.

D’Arcy spotted a gap in midfield and finished off in clinical fashion, with Rob Keogh converting and kicking three penalties. Galwegians outhalf Aidan Moynihan also landed three place-kicks, while winger Alan McMahon went close to squeezing over for a try in the corner.

Talented scrum half Neil Cronin tallied up 18 points, including a try, as Garryowen overcame hosts Old Belvedere 28-13 at Anglesea Road. Nearby at Belfield, Barry Daly waltzed over for two tries as UCD enjoyed an eye-catching 39-10 triumph over defending champions Lansdowne.

The title holders suffered their third defeat in four league outings and were comprehensively outplayed by Noel McNamara’s students, who are now up to second in the table. They had braces from back-three stars Daly and Tom Fletcher, and a try apiece from Conall Doherty and Jamie Glynn.

New Young Munster boss David Corkery got one over on his former club Cork Constitution as the Cookies won a hard-fought Munster derby 11-10 at Tom Clifford Park. Replacement winger Darragh O’Neill’s 55th-minute try proved decisive for Munsters whose third straight victory has moved them up to sixth place - two points outside the top four.

In Division 1B, Munster flyer Stephen Fitzgerald bagged a brace of tries as Shannon emerged as 32-10 bonus point winners over Belfast Harlequins at Deramore Park.

Dublin University chalked up their fifth success in-a-row when hammering Dolphin 44-3. Centre Seb Fromm scored either side of half-time, making it three tries in two games for the German Sevens international.

Meanwhile, number eight Matthew Rea crossed the whitewash for the second week running as second-placed Ballymena got back to winning ways by edging out Buccaneers 15-14 under the Dubarry Park floodlights.