Technology’s growing influence in the game

To gain an edge on and off the pitch, in training, playing and even sleeping, all manner of equipment is being used 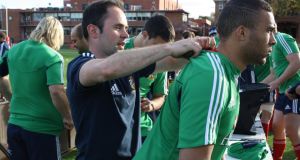 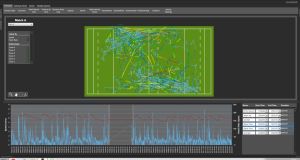 From the PositionalMapFullGame, GPS data from an under-20 international winger

The game is whistled to a stop. All eyes are on the referee as he asks the TMO to replay an incident on the stadium’s big screen. A team analyst continues coding match data. A coach notices the GPS system is alerting him about a tiring player. A fan checks the score from another match on their smartphone.

This is modern rugby, where the battle of blood and honesty on the field is being steadily joined by a technological battle off it. From the British and Irish Lions to schoolboy rugby, teams are embracing technology to give them an edge.

It used to be so simple. “Work as hard as you can in training; it’ll serve you well on match day.” Sensible advice – or so it seemed.

“Back in the day we’d be on the training field for two hours. Not that we’d mind, we just didn’t know any better,” says former Munster and Ireland hooker Jerry Flannery. “Now there’s a lot of control, an awareness of the cost on the players’ bodies. It’s more about keeping them fresh for the weekend’s game.”

Measuring body fat with calipers? These days full-body Dexa scanners measure everything from muscle mass to fat to bone density. Munster centre James Downey says “tech was a side project” when he started in the professional game, whereas “now it’s used to react to what’s going on”.

He likes being able to see measures of how he’s performing compared to his teammates, as well as his own previous performances. With one click he can view all inputs he had in a particular game – carries, tackles, rucks, the lot.

Will Douglas, sports scientist with Munster, says using GPS and other tools “help us to manage load in training. We monitor their thresholds to keep players fresh for games”. During training and matches, data feeds are monitored from the touchline in real time. Munster has formed a strong research link with CIT who developed the tool they use to track players’ “wellness markers”, like stress and sleep quality.

Leinster use a similar tool from start-up Kitman Labs, in which both Jamie Heaslip and Kevin McLaughlin are investors. Analysts dive deeply into training, wellness and match data, looking for signals or patterns indicating a player might be in danger of injury or poor performance.

While this season is the first in which Clermont are using GPS in both training and games, it is used by all of Ireland’s professional teams. Using a small unit worn either in a close-fitting vest or in a concealed pouch in the jersey, it enables coaches to monitor players. “If they see you’ve done too much they’ll actually pull you out of a session,” Downey says.

There are numerous competitors in the GPS marketplace. Munster and Leinster use Australian product Catapult, while Ulster, Connacht and the IRFU use Viper from Dundalk-based STATSports. The All Blacks use VX Sports, also used by Jonathan Sexton’s Racing Metro.

Using the same essential principles, each has slightly different strengths; some units feature more frequent data-sampling while others have more accurate measurement of collision forces. Some are simply smaller.

With such access to live data, the impact of substitutions can be analysed. “Ideally you want a sub to make an immediate, high impact,” says STATSports’s Kevin McDaid, also a lecturer in Dundalk IT, “then you want to see if they can maintain that.” GPS, often used in combination with a heart rate monitor, is ultimately a performance tool to help coaches and players make smarter decisions.

When watching a game of professional rugby, it should be assumed that the match will be subjected to video analysis by both home and away teams. Analysts break down the tape into events using software tools such as SportsCode. Video is then distributed to players via their own tablet or mobile phone, while the analysts will break down the game further, reporting on findings to the coaching, fitness and medical staff. This is not isolated to the professional game, though.

“The lads can use their own iPads and phones to watch the clips,” he says, with clips tailored by position or event just as for a professional team. Tommy Conneely of Avenir Sports, distributor for Sportscode in Ireland, estimates that 33 or 34 AIL clubs use Sportscode as well as a handful of junior clubs in the Leinster region. At the top level of the schools game, Conneely says there are far more schools using the software than not. Clongowes is far from unique.

Referees are not immune to technology’s relentless march. The television match official is now almost ubiquitous, Ref-Link is an expected part of a broadcast and referees can also have a camera mounted on their person. Yet the technology itself can work against officials. Aware that every word is being broadcast, when officials consult they can often be heard speaking in unnatural, legalistic bursts. One international referee said he would love a “mute” button so they could talk briefly in private before announcing the final decision publicly, similar to how it works in America’s NFL.

Match-day injury
Video is being used in match-day injury diagnosis, particularly concussions, allowing a doctor to add visual evidence to their assessment of a player’s symptoms. “We encourage that it [video] should be used where possible as a tool to assist the match-day doctor and team doctors,” a spokesperson for the IRB says. “Not every venue in international rugby has the capabilities to provide this.”

For the viewer, choice has expanded beyond television. The IRB live-streamed every match in the 2013 Pacific Nations Cup as well as other tournaments. “It’s something we have done for a couple of years now and we will be doing more,” the spokesperson adds. “In general we are looking to expand it although we need to balance the costs and value in doing this”. The PNC attracted more than 15,000 online viewers, with the Junior World Cup about twice that.

RTÉ streams live games within Ireland. A high-profile Irish Six Nations match might have a peak viewership of up to 20,000 concurrent users, generating over 20 gigabits per second of streaming traffic. While RTÉ has its own streaming capacity, for very high-demand events like this they would typically outsource to a dedicated content delivery network which would have the extra capacity needed.

MLB Advanced Media, an independent digital offshoot of Major League Baseball, is such a delivery network. It streamed its first live MLB game in 2002, helped its first external client in 2006 and in 2013, streamed in the region of 20,000 live events for many different sporting partners. “It’s a 24/7/365 business” says Advance Media’s Matthew Gould.

Rugby is still very much a niche sport globally and perhaps ideally placed for online distribution. New Zealand streamed some test matches live in 2013 to as many as 159 countries, encouraged to move in that direction by partner AIG who wanted as many eyeballs as possible exposed to the brand.

The Ultimate Rugby smartphone app, launched by tech entrepreneur Ray Nolan and Brian O’Driscoll in October 2012, allows a fan to access all worldwide professional rugby fixtures, line-ups and results in one place. In 2013 it won the AIG Rugby Innovation Challenge, impressing the judges with its use of Opta match data. As its prize, Ultimate Rugby now has access to both live and post-match data feeds for all international rugby covered by Opta in 2014 and 2015, including the World Cup.

“We look forward to seeing what they can do with our data,” says Opta’s Angus McNab. In a “second- screen” viewing world, the potential is enormous.

Perhaps the next great safety advance is in gumshields. The Mamori gumshield, invented by Irishman Mark Dillon, was designed to alert coaching and medical staff if a player receives a concussion-causing impact to the head.

Using inbuilt sensors – a gyroscope, magnetometer and accelerometer – a tiny transmitter sends impact information to the touchline. Alas, it is yet but a prototype and bringing such an invention to production would take investment and money.

And if you’re in near Grenoble’s training pitch and hear a buzzing overhead, don’t be alarmed. They have tested and are using a quadcopter drone to video training from high above the field. “The footage is incredible,” says next season’s head coach Bernard Jackman.

Sportscode, streaming and quadcopters. This is rugby in 2014.