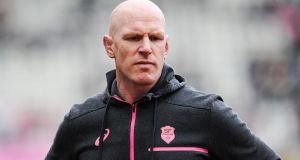 Paul O’Connell will leave Stade Francais at the end of the season. Photograph: Sandra Ruhaut/Icon Sport via Getty Images

Paul O’Connell has ruled out a move to another French club in a statement issued by Stade Francais confirming his intention to step down in his role with the Parisian club as an assistant coach.

The former Munster, Irish and Lions captain and lock oversees the Stade line-out, with an additional remit at the breakdown, and the statement said that the club and O’Connell “have decided by mutual agreement not to renew their collaboration next season.”

O’Connell had signed a one-year contract with the option of another year, and the club stressed that he is “and will always be considered a member of the Stade Français Paris family.”

Interestingly, O’Connell indicated he would not be joining another club after speculation linking him with Toulon, whose owner Mourad Boudjellal was keen for the former Irish captain to join after doing so as a player at the end of his career only to be forced into retirement with the hamstring injury he sustained in ireland’s 2015 World Cup pool win over France in Cardiff.

O’Connell was quoted as saying: “I have decided not to stay beyond by contract with the club and do not plan to join another club next season either. I had a great adventure at Stade Français Paris. I am grateful to the club for the opportunity they gave me to live and work in Paris. I was delighted to be able to work alongside (head coach) Heineke Meyer, the staff and the club’s players.”

“Finally I am looking forward to the end of the season and I hope to be able to help the club during the eventual finals of the Top 14.”

Stade wished him the best “for his next challenge”, although it could be that O’Connell will step away from coaching.

“I’m actually stopping myself from making any long-term plans all the time because coaching is a very enjoyable, rewarding and fulfilling job but it’s also a very tough job from a family point of view and even from a health point of view.”