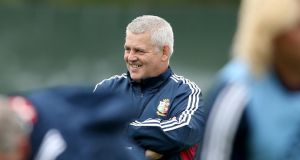 Warren Gatland: happy with the way preparations are going.

A week out from their departure for a commercially-driven detour to Hong Kong and a game against the Barbarians, intrusive from a rugby perspective, Seán O’Brien is the Lions’ only main injury concern.

That said, the Leinster flanker may yet be available for the ensuing game in Perth, against Western Force on Wednesday June 5th, or against the Queensland Reds in Brisbane three days later.

“He’s not fit to play for Leinster, and in saying that he’s probably a couple of weeks away,” said Warren Gatland yesterday in reference to Saturday’s Rabo PRO12 final against Ulster at the RDS with a typical candidness not always associated with coaches’ injury updates.

“With a bit of luck by the second or third game on tour he should be up and running. The idea with him this week is to see the medics and just take a little bit of pressure off the Leinster medical staff, and he can spend some time with the squad. I think that will be good for him as well.”

Even if O’Brien had been available to play for Leinster this Saturday, he would not have been available for the Lions until the second or third game of the tour anyway, as is the case for all those involved with their clubs this weekend, including Brian O’Driscoll.

“By all accounts he’s going to be fit and available this week,” said Gatland.

Vowed to be on plane
All told, 15 of the 37-man squad are otherwise engaged this week, six apiece with Leinster and Leicester, plus Northampton’s Dylan Hartley, Ulster’s Tommy Bowe, and Toulon’s Gethin Jenkins who, unlike Jonny Wilkinson, has vowed to be on the plane to Hong Kong next Monday.

Gatland and his staff will pick the team and bench to face the Baabaas from the 22 in camp at the Carton House Hotel in Maynooth, where the local facilities have been supplemented by a mobile Cryotherapy chamber, with an additional prop, perhaps Jenkins, and one of the two English hookers, Tom Youngs or Hartley, leaving Gatland and his staff effectively coaching the late arrivals as a team to play the Force.

“Just getting those players up to speed,” would be their biggest coaching challenge in the next couple of weeks, admitted Gatland, and while privately he might have preferred if Leinster and Leicester had not reached their respective domestic finals, now that they’re there it would be no harm if they won.

“When you bring a squad together you notice a big difference between players coming from successful, winning environments compared to those from environments that aren’t quite so successful. If those two teams happen to win the finals, I think it would be hugely positive for the squad,” said Gatland.

Furthermore, “quality players” adapt quicker, with Gatland particularly enthused by the squad’s first week in camp in the Vale of Glamorgan last week.

“I was really impressed last week, not just how we gelled, but from a technical aspect. Having been involved four years ago, the improvement technically of the players has increased significantly, so that was a real positive aspect about this squad coming together,” he said.

Sam Warburton and other players spoke of it being a relatively quiet camp, although various committees have been formed, with Mike Phillips an unlikely tourist guide.

This week the Welsh scrumhalf is rooming with Conor Murray, aka ‘Baby Murray’. “Well that’s a compliment to him isn’t it?” quipped Phillips, who added that he may avail of the room share. “He might have a broken leg by the end of it.”

As the youngest member of the party it is the 20-year-old Stuart Hogg’s responsibility to look after the Lions mascot on tour, but Hogg’s annual battle with hay fever is being exacerbated by the fluffy toy.

“The hay fever’s a nightmare. Holding that lion in my hands is bit of a nightmare because of it’s long main – it gets a little bit itchy. Maybe I’ll speak with the gaffer and see what he says about that,” said Hogg.

This has been compounded by a bang to his quadriceps and a burst ear drum, prompting Gatland to remark: “The last thing I can afford is a Scotsman to go down.”

1 Few, if any, have given as much to Munster as Garrett Fitzgerald
2 On healing and wild hurling: The re-education of Diarmuid Lyng
3 Wexford best the weather and Kilkenny on a mad day to be hurling
4 ‘Your father works for my father’: Schools rugby turning toxic in the stands
5 Keith Earls far from ready to abandon centre stage
Real news has value SUBSCRIBE