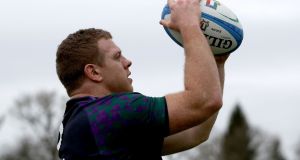 Leinster hooker Seán Cronin has been omitted from a 37-man Ireland squad that will train in Carton House on Wednesday afternoon while provincial teammates Robbie Henshaw and Dan Leavy are not in contention for selection for Sunday’s Six Nations Championship match against France at the Aviva stadium (3.0).

Cronin (68 caps) started a Six Nations match for the first time against Italy in Rome but was replaced by Niall Scannell after 54-minutes. Ireland’s lineout misfired that day but did so for both hookers and there were other reasons attendant to that general issue. Joe Schmidt has called up Ulster’s Rob Herring, one of three hookers alongside captain, Rory Best and Scannell.

Herring won the last of his seven caps against the USA in November and played in all three matches on Ireland’s summer tour to Australia last year, starting in the first test.

CJ Stander returns to the squad having recovered from the facial fractures he sustained in the opening Six Nations match against England while Connacht scrumhalf Kieran Marmion has proved his fitness with the province in recent weeks in the Guinness Pro14. Marmion replaces Caolin Blade in the squad.

Leinster outhalf Ross Byrne, originally omitted from the squad for the first three matches in the Six Nations, comes into the panel, one of four outhalves, alongside Johnny Sexton, Joey Carbery and Jack Carty who made his Ireland debut as a 77th minute replacement against Italy.

Garry Ringrose has recovered from the hamstring injury sustained in the defeat to England that caused him to miss the games against Scotland and Italy. The Ireland team to take on the French will be announced on Friday.