Rónan Kelleher back in the groove and looking for further opportunity 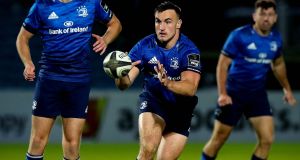 Rónan Kelleher in action for Leinster during the Guinness Pro 14 game against the Dragons at the RDS. Photograph: Ryan Byrne/Inpho

When the Leinster think tank opted to demote Rónan Kelleher from starting hooker to the replacements bench for the Heineken Champions Cup quarter-final against Saracens it was something of a surprise. The decision seemed quite un Leinster-like.

By contrast, when Jordan Larmour’s status as first-choice fullback came under scrutiny after some timing issues in the air against Munster, and there were calls for Rob Kearney to be reinstated for the Pro 14 final against Ulster, they stuck by their young man. And that was, well, very Leinster-like.

Although Kelleher was a relatively raw, if incredibly dynamic, 20-year-old with just one start behind him coming into the 2019-20 season, the Leinster coaches backed him to the hilt, making him their first-choice hooker until he sustained a broken hand in the first of the back-to-back wins over Northampton.

After the resumption, Kelleher started both wins over Munster and the final against Ulster, but four lost lineouts – though due to a combination of factors – contributed to him being named on the bench for the first time this season against Saracens.

He maintains he quickly overcame any disappointment to refocus on his role off the bench, which he underlined with his impact from early in the second period and carried into last Friday’s win over the Dragons.

Maybe the experience will do him good. Reflecting on the lineout wobbles against Ulster, Kelleher says: “There were a few different things. I thought, to be fair, Ulster had a good defensive system in play. We were trying to win ball at the tail and they were going up contesting, but obviously it was disappointing that we couldn’t get proper launch into the game, which we would have liked.

“We have worked hard to fix that in the last couple of weeks in training. We have been focusing on that area, getting comfortable with our drill again. I feel like it’s fixed now.”

Whether it was the closer proximity of the RDS press box to the pitch, and not least James Lowe on the near touchline, but from the opening scrum against the Dragons it was discernible how vocal the Leinster players were.

“Obviously it’s very different without the fans and we all wish they could be there to support us and give us that energy but I felt in particular last weekend the energy was really good, everyone was excited to be back at home playing in the RDS. Despite there not being any fans, everyone was just happy to be at home in comfortable surroundings.

In February, Andy Farrell brought Kelleher into the Irish match-day 23 as he won his first three caps off the bench in the opening three rounds of the 2020 Six Nations.

“I was just coming off a broken hand so it was definitely being thrown in at the deep end but it was really enjoyable. It was great learning off all the coaches – Faz [Andy Farrell], Catty [Mike Catt], Fogs [John Fogarty], it was brilliant, the whole thing. And then working with Simon [Easterby] in the lineout, it was a different system we have to here and it was interesting picking that up quite quickly and running with it from there. It was a great learning experience and please God I’ll be involved in the future as well.”

Kelleher maintains he’s not thinking about the Irish squad for the forthcoming games against Italy and France, to be named this week, but it will be another hell of a surprise if he isn’t named again.

George Ford and England wary of possible Welsh backlash 06:00
Ian O’Riordan: Debate on return of competitive running starts fast and stays hot 06:00
Ireland out to put things right against Georgia side trying to make a point 06:00
It’s good to have Richie Hogan back, he was missed 06:00
David Humphreys: Georgia simply can't be dropped in at the deep end 06:00
Here is your handy guide to sport on television this week