‘He’s one of the best players I’ve ever played with. As a forward, I’d say he’s the best’ 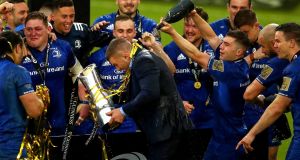 Johnny Sexton described Seán O’Brien as the best forward he’s ever played with amid a glowing tribute to the London Irish-bound Ireland and Lions flanker.

O’Brien was given the honour of lifting the Guinness Pro14 trophy in a rain sodden Celtic Park after Leinster’s hard-earned 18-15 win over Glasgow and Sexton explained the reasoning behind this decision.

“Yeah, we knew early enough that Seánie was struggling a little bit and we wanted to make sure his last contribution wasn’t Saracens,” said Sexton in reference to Leinster’s Heineken Champions Cup final defeat, which transpired to be O’Brien’s last game for Leinster.

“His last memory now will be lifting the trophy, there’s not too many people who have lifted the trophy by themselves in Leinster. It’s guys like Leo and Isa [Nacewa], they’re the only two. The rest of the time we always do it in twos.”

“It was fitting for him, we’re really going to miss him. I’m going to miss him. To be fair, he’s one of the best players I’ve ever played with. As a forward, I’d say he’s the best. No offence to Leo,” quipped Sexton of Leo Cullen, his former teammate and now head coach who was sitting alongside him.

“Just, other forwards in the world didn’t have his drive, as a leader and a player we’re going to miss him. Obviously, we drive things from within and make sure the younger players coming through are driving it.”

Inevitably, Sexton was asked about the decision to go for a try around the hour mark when Glasgow were down to 14 men and Leinster were leading 18-10, rather than take a penalty from in front of the posts.

We went for a bold play, we went for a scrum when they were down to 14. Obviously half-way through that period they got back to 15 and we were stubborn to keep going. We thought that we could get in on the left the way they were set up defensively but we weren’t able to do it that moment. But in those conditions eight points is still a good lead and we were able to run the game down for another 10 minutes in and around that area.”

Thus line of questioning, and post-match explanations, brought to mind the European final two weeks ago, which Sexton admitted was their most disappointing day in a Leinster jersey.

“Look, I’m very proud of the lads. Like Leo said, the way we bounced back after what was probably the lowest point of all our careers really in terms of losing a European Cup final.”

Conceivably, this could prove to be Rob Kearney’s last game in a Leinster jersey, but the fullback strongly indicated that he will sign a new contract after the World Cup. When asked if that would be the case, he said: “Yeah, please God.”

Of the win, Kearney said: “It was incredible, you can see why it’s a place with such history. There was a few spare seats today, but the noise was incredible. We weren’t expecting a huge amount of support given the amount of people that came to Newcastle, but there’s still so many people in blue for us today. It’s brilliant.

“We knew they were going to come out, it’s a huge game for them - they’re at home, it’s the final and it’s kind of written in the script for them a little bit. So, they really came out of the blocks and that first 10 minutes was really intense, we weathered the storm a little and got a fortuitous enough try to get us back into the game.”

Leo Cullen admitted: “It wasn’t the prettiest of games maybe. I thought the players have applied themselves unbelievably well over the last couple of weeks after losing a final.

“I thought we had some chances early on, didn’t quite finish them. Glasgow came into the game and were very strong. From 7-0 [down] it was a big moment: we hit back straight away, then we had a period when we were in the ascendancy. We were able to manage that period quite well, and with the conditions the way they were it was going to be hard chasing the game. For most of the second half I thought we played the territory game pretty well.

“The yellow card to Rob could have been costly to us. When he’s chasing his eyes are on the ball, you have a collision in the air, and you have to deal with the consequences of what the referee deemed on the day.

“I thought there were two teams going fully committed at the game. You could see how tight it was.”