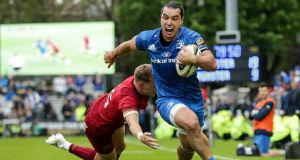 Leinster’s James Lowe evades Munster’s Mike Haley on his way to scoring a try in the Guinness Pro14 semi-final at the RDS, Dublin on Saturday. Photograph: Laszlo Geczo/Inpho

For anyone else, reaching the last four of both competitions would constitute a fine achievement. But we’re back to that hoary old chestnut of what constitutes success, and so for Munster another semi-final defeat just felt like a dog-eared script.

Déjà vu all over again, so to speak.

Munster have now lost eight semi-finals and two finals since they last lifted a trophy when beating Leinster in the 2011 final of this competition.

Peter O’Mahony, then 21, wasn’t in the match-day squad that day, and, following the Euro defeat by Racing last season, he admitted he was sick of losing semi-finals. After his fifth as captain in the last three seasons, along with a final, and seven in total, words probably could no longer explain how he felt.

Somehow, after the World Cup, he and they will have to start from zero again.

“Look, the lads that have been here for a while know the score and I’ll be depending on them to do the same. The younger guys need to understand that these semi-finals are hard to get to and we’ve done a lot of good work, but they’ve got to understand that we need to find a little bit more and I’ll be depending on our leadership group to get that point across, particularly for our off season and building into the start of the season this year, how vitally important that is every week.”

While O’Mahony just looked angry, Johann van Graan looked shaken. Even in his 1½-year tenure, he has already presided over four semi-final losses. He did his best to accentuate the positives, winning three more matches than last season, and lamented Leinster’s defeat at home by Glasgow which denied them a home semi-final, and he had a point. Home teams have won 20 of 22 semi-finals.

We’ll take our time, try and find the right people, and then move forward

However, Munster’s plight is compounded by the departures of Jerry Flannery and Felix Jones, meaning Van Graan and the Munster hierarchy are now searching for two or three new coaches.

“I’m not going to sit here and tell you a different story – it is going to be difficult,” admitted van Graan. “The positive is we’ve got continuity in our players and in terms of our S&C and our medical department, and in our general department, we’ve got a lot of continuity. Now, hopefully, we will find the right people who will fit into Munster, and make us a better team.

“Like I said, the 28th of September is a long time away,” added van Graan, in reference to the start of next season’s Pro14. “So we’ll take our time, try and find the right people, and then move forward.”

As ever, Van Graan could not fault Munster’s effort. A host of them put in big shifts, such as Niall Scannell, Jean Kleyn, Tadhg Beirne and CJ Stander. But, save for Chris Farrell’s lines of running, their running game became more route one as their plight worsened.

The dancing feet of Joey Carbery and Keith Earls were largely kept in check, so their attack lacked craft and variety. Van Graan lamented the costly penalty count of 13-7, and a few avoidable and costly ones spring readily to mind. However, as telling a statistic was that despite more possession and territory, Munster conjured only one line break – courtesy of Conor Murray’s sumptuous skip pass to Beirne in the build-up to James Lowe’s yellow card for a one-handed slap-down and Carbery’s second penalty.

By contrast, Leinster had a dozen line breaks, beat twice as many defenders (28 to 16) and scored the game’s only two tries. The first was completed by one of Sean Cronin’s three line breaks, after Cian Healy and Tadhg Furlong had in turn straightened the line and passed perfectly, the front-row finishing the move as efficiently as any trio of backs.

It was Cronin’s 13th try of a remarkable season, and his 40th overall (equating to 200 points) in 172 games for Leinster. An earlier break, cutting back onto Luke McGrath’s switch pass, led to Niall Scannell’s yellow card and a Ross Byrne penalty. Cronin remains by some distance the best game-breaking Irish hooker around, and by a distance.

I thought Jack Conan was very good, looked very strong in contact on both sides of the ball

Leinster’s back-row eclipsed their Munster counterparts around the park. Josh van der Flier was Man of the Match after three months out following ankle surgery, with 27 tackles, but equally Jack Conan and Rhys Ruddock had big games. Conan’s dynamic charges (making 41 metres to Stander’s 20, each off 17 carries) was augmented by his ability to beat tackles and offload, and his line speed in defence.

“I thought Jack Conan was very good, looked very strong in contact on both sides of the ball,” ventured Leo Cullen. “He got off the line well and put pressure on their attack. The same with James Ryan, who gets through a mountain of work, as he always does.”

Another difference was Leinster’s ability to go up a gear. Akin to Saracens when Maro Itoje was yellow-carded last week, they brought more line speed and intensity when Lowe was binned to emerge 3-3 from that period. Then, when Scannell was sidelined, they upped their tempo and width to win that spell 10-3.

A la last week, Leinster were again true to type when going up the line well into first-half overtime, and were rewarded with Ross Byrne’s third penalty to go in at half-time 8-6 ahead. It felt significant.

“Sometimes it doesn’t have to be the prettiest,” said Cullen. “It’s cup rugby so winners go on and stay in the competition and get a chance to lift the trophy. Losers are done, they’re out, basically.”

As Munster know only too well.