Connacht bid to extend gap between themselves and Cardiff 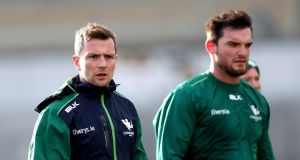 Connacht need to take every advantage of the vagaries of the Galway Sportsground this evening (7.35pm) in a bid to extend the gap between themselves and Cardiff.

John Mulvihill’s Welsh outfit are a single point behind Connacht in conference B, and, with the PRO14 entering the business end of the season with 10 games remaining, the pressure is on both these sides to make a push.

Only 10 points separate Connacht from the top, and Connacht coach Andy Friend says the win in this corresponding fixture last season was vital in qualifying for the knock-out stages.

Friend’s side enters the game after a run of five losses; The Blues with three wins from five. However the Connacht coach says the three-week break was vital for the squad’s recovery after 13 games on the trot.

“The break allowed time for a few injuries to clear up and gave some recovery time to others who had played a lot of minutes over the 13-week block of games. The boys are ready to go, and know the importance of the next three games in the context of our season.”

Storm Denis is expected to play its part, and no better player to exploit it than Jack Carty, who renewed his partnership with Kieran Marmion in Connacht’s narrow defeat to Montpellier in their final Champions Cup pool fixture.

There are four changes to that side, with Peter Robb replacing Ireland-tied Bundee Aki in the back line, while Finlay Bealham, Ultan Dillane and Paul Boyle come back into the starting line-up for Dominic Robertson McCoy, Joe Maksymiw, and Eoghan Masterson respectively.

Still to play another in-conference four games away, including the Blues, Connacht need to make home advantage count. Cardiff are missing a handful of Welsh players, not least the injured Josh Navidi, although they are boosted with the return of international Seb Davies on the bench, while Josh Turbull makes his 100th PRO14 appearance.

“Connacht and Cardiff in the same conference this game becomes even more important,” says Friend. “A win in this game last season ultimately qualified us for the knockout stages of the PRO14 and for a spot in the Champions Cup. I’m sure they will be keen to turn the tables this season, so we face a huge battle.”