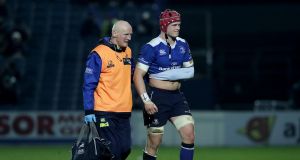 The omens didn’t look good when Ireland and Leinster flanker Josh van der Flier left the field against Edinburgh on Friday. That gloomy prognosis was confirmed on Monday by Leinster assistant coach Stuart Lancaster, who said the 23-year-old could be out of rugby for up to eight weeks.

His grade-three AC shoulder joint injury will continue to be assessed over the coming days but the Irish flanker could miss the entire Six Nations Championship as well as the European Champions Cup quarter-final clash with Wasps on April 1st.

2 What can Ireland expect from Joe Biden?

9 ‘I got a burning smell in my nose’: Third-wave Covid-19 patients share their experiences

10 Kamala Harris is about to make history. So is her ‘big, blended’ family

17 Kathy Sheridan: There is no fairytale ending to the Trump version of American Psycho

19 Marianne Faithfull on nearly dying of Covid-19: ‘My lungs are still not okay. I need oxygen’

28 Will special needs classes reopen? ‘There are times we find it very hard to cope’

29 ‘I’m the meme queen’: A QAnon digital soldier marches on

30 The only four skincare products you need

31 Covid-19: Almost half of recent arrivals did not confirm place of residence

32 Barry Gibb: ‘My brothers had to deal with their demons, but my wife wasn’t going to have it’

33 Taxing pandemic payment ‘could be unconstitutional’

36 BusConnects: Over €55m spent by NTA on bus scheme so far

38 The 20th century belongs to America