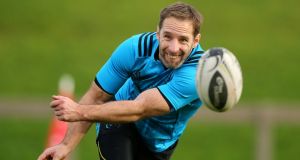 Tomás O’Leary says Ruan Pienaar “dictates the tempo of the game and himself and Jackson are playing particularly well together”. Photograph: Cathal Noonan/Inpho

Experienced Munster scrumhalf Tomás O’Leary has said Anthony Foley and his coaching team have been let down by the players this season.

The 32-year-old said the current run of five losses, which equals their worst string of defeats in the professional era, said the players had no one to blame but themselves. He said it was up to the players to sort out the situation and that a win in Belfast on Saturday would be the perfect start to 2016.

“We have let them down as a player group. We have everything in place, we have a good game plan and we are creating opportunities,” said O’Leary, who returned to Munster during the summer after three seasons with London Irish.

“Obviously, it has been a tough few weeks because we haven’t executed on the pitch. It is about us accepting that responsibility as players and trying to correct it.”

Munster have only won on three of their 13 visits to Belfast, with last season’s 23-23 tie the first draw between the sides in the competition.

“I am used to it at this stage. It’s not nice. No one likes it because unfortunately it is part of being a professional rugby player. You take the pats on the back in the good times and you have to take the kicks in the backside in the bad times,” he said.

“Since I started as a professional rugby player, especially in key positions, you are going to get a fair share of criticism from the press, supporters. It is just part of your job, part of being a pro rugby player. You cannot take it too personally.

“Obviously, I would much rather the praise but as a squad we can’t deny we deserve a bit of criticism. We are not getting results, so it comes with the territory.”

The Cork man said the loss of several legends in recent years took its toll but there was enough talent on board to reverse the current slide.

“I think it’s a coincidence of results. Everyone will point to the players who have gone. I guess you do miss players of that ilk but I believe we have the players in Munster to win and to succeed,” he said.

O’Leary has won before in Belfast but knows his opposite number Ruan Pienaar will play a key part on Saturday as Ulster bid to extend their winning run to five games.

“He has been the catalyst for Ulster’s recent pick-up in form. He’s world-class, his kicking game off both feet, the tries he sets up, he dictates the tempo of the game and himself and Jackson are playing particularly well together.”

Munster have announced that Robin Copeland and Dave O’Callaghan have signed two-year contract extensions, keeping them at Thomond Park until June 2018. It has also been confirmed that academy player Rory Scannell has signed a senior contract.