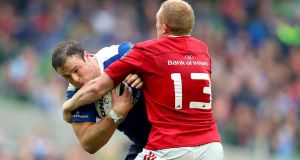 The four proud provinces return to European Champions Cup rugby next week with a quartet of bruising opening jousts against more match-hardened French opposition. But at least all have had their preparations fast-tracked by full-on derbies which have left Leinster trailing Ulster narrowly on points difference and seemingly best-placed in advance of having the most winnable match of the four.

This followed Saturday’s fairly handsome 25-14 win over Munster, and not alone did they also emerge unscathed, Leo Cullen hinted that Seán O’Brien could be amongst their returning numbers for next Saturday’s game against Castres at the RDS.

“There may be a few, we’ll see,” said the Leinster head coach with a smile, and when asked specifically about Seán O’Brien, smiled again: “We’ll see how they go.”

Montpellier, Leinster’s opponents away on Sunday week, beat Castres 28-19 on Saturday to go third in the Top 14 table after eight rounds, and despite the win over Munster, Cullen said they will need more width in attack while also brushing up on their maul defence.

“I thought we just got a little bit narrow in our attack. Running into big French teams we’re going to get gobbled up, so we need to put a bit more shape on our attack, which we have spent a lot of time working on, but recognising some of the opportunities there to get to that space.”

“The set-piece battle is going to be huge against those two French teams and you can’t give up those metres at maul in particular because if you watch the Top 14 you watch a lot of drives. Those teams are playing against each other today so we’ll see how they go and put in a plan for the next couple of weeks.”

But after having 21 players at the World Cup, Leinster are in a much better place than they were going into their opening home loss to Wasps last season.

“It’s amazing to have players who understand and know the calls – some of them anyway,” quipped Cullen. “You can’t afford to look too far ahead, Castres are dangerous. Last week they played against Clermont away and they were in that game, until Clermont got a couple of opportunist tries.”

“You can see the pace that they’re playing at and I’m sure they’ll come to the RDS just wanting to have a crack. They’ve a big enough squad to be able to manage, look across their key areas in the field they’ve got strength in depth like most French teams. It’ll be a tough challenge.”

Tadhg Furlong knows how important the Leinster scrum and mauling game will be over the next two weeks, and the memory of last season – when Leinster lost five of six pool games, remains an embarrassment for the three-time winners.

“Europe went poorly last year for a club with the history we have in it. It was tough to take at the time. This year, through this run of games, coming out with five out of six and being level with Ulster at the top of the table is really good for us. It shows our progression.”

“The game tonight against a really good tough pack that are running hard at you is really good preparation for us. We’re really excited to get stuck in next week and the week after and have a look at these teams and having a crack at them.”

Rassie Erasmus also said Saturday’s game was ideal preparation for Munster’s opening European game next Sunday away to French champions Racing Metro. Racing won a dramatic Parisian derby against Stade Francais 29-22 thanks to a 79th minute try by Camille Chat. That elevated Racing to sixth, and maintained their unbeaten home record this season.

“The way we lost to Leinster isn’t ideal,” said Erasmus, “but an away game against Leinster that we lost probably isn’t something we should dwell on too long. It is so easy to know what we did wrong, to fix it is another challenge. It was of help going into Europe, it was like a European game.”

It was also another game under Peter O’Mahony’s belt, even if he looks understandably rusty and is unlikely to have 80 minutes in him next week.

“It’s tough to take the captain off at half time, all of those things will only grow from this, you take your captain off, you have to handle that. You lose a little momentum, that’s a given, but again, it’s a long season.”

Next week’s game will see Ronan O’Gara plotting against the team with whom his European exploits were the stuff of folklore. Erasmus played down how much O’Gara’s presence will influence matters.

“I am sure if you asked Ronan and I’m sure if you asked our guys in Ireland that won’t come into play. I know it is a nice thing and spices the day up but he won’t go ‘we know this and we know that’ because he hasn’t been here for a few years. Just nice to have guy who played such a big part in the history of Munster to have a role, it spices it up. . .”

On a weekend which rained a record 45 tries and nine bonus points in six games, the Aviva yielded the lowest return of five tries and no bonus points.

But Connacht host Toulouse on Saturday night at the Sportsground buoyed by last Friday’s first ever bonus point win over Ulster and secure in the knowledge that they and their bearpit have rediscovered their old mojo.

Suddenly they’re on the up whereas Ulster were wounded, Les Kiss admitted, prior to Sunday’s trek away to Bordeaux Begles. The Ulster coach also expected them to be without Louis Ludik, although Stuart Olding should be back.

Ian Madigan is expected to return to the Bordeaux starting line-up after Lionel Beauxis guided them to a 27-25 win at home to Brive which left them fifth in the Top 14.