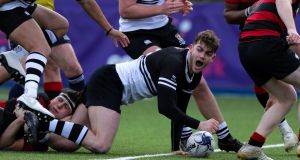 A late Sam Prendergast penalty was all that stood between Newbridge and Kilkenny in a hectic Leinster Senior Cup quarter-final at Donnybrook on Wednesday.

There was an early sense of purpose from Newbridge, who immediately involved backs and forwards, fullback John Shanahan using his footwork and Donough Lawlor his bulk to get them moving in the right direction.

They forced two penalties through pressure as Kilkenny were stretched, wing Adam Strong snatching a vital turnover in the shadow of his posts.

Kilkenny had to weather the storm as Newbridge’s Diarmuid Mangan and Lawlor threatened in close and Marcus Kiely looked a handful in the centre.

When respite did come, Kilkenny outhalf Charlie Tector went to the sky with mixed returns, Donal Conroy spilling one kick and Shanahan taking the other.

The balance of possession was evening out, although Kilkenny had to make do with most of their ball coming inside their own half.

This couldn’t continue as kicks from Prendergast and Shanahan kept them penned in.

Kilkenny eventually found relief from Joshua Akanji-Murphy who forced a penalty out of prop Peter Leavy on the floor.

At last, Kilkenny had something to work with until their lineout misfired. It was increasingly looking like a match that would go to the team who made the least mistakes.

Tector did connect with hooker Darragh O’Reilly up the right flank as a source of encouragement. Then, Tector’s brute force and soft hands put captain Ryan Strong in the clear, Newbridge conceding a penalty in desperation allowing Tector to kick the opening points in the 24th minute.

From the restart, Kilkenny centre Matthew Hodgins exposed a hole in the chasing Newbridge line to outpace the covering Prendergast and run in from 70 metres out to give his side an 8-0 lead.

The complexion of the game had changed, Kilkenny missing out on the chance to extend their lead when Tector pulled a penalty wide just before the break.

Newbridge began the second as they did the first, in control of everything except the scoreboard, with Prendergast’s passing causing problems and Conroy twice making breaks.

This time, they were building some momentum, finally making the breakthrough from Lucas Berti-Newman’s ball to Kiely, the captain blasting through two bodies and twisting to the whitewash for Prendergast to convert in the 45th minute.

Newbridge promptly made a mess of the restart, inviting Kilkenny to respond, wing Greg Edogun taking the ball at pace and Akanji-Murphy being called back when closing in on the corner flag.

It was getting tense, mistakes outweighing accurate execution, Kiely shaking Tector up in a rattling tackle and Ryan Strong dipping into a ruck to stall Newbridge.

The valiant defence was tested further by the introduction of Luke Dunleavy, with Prendergast finally easing Newbridge in front from a 61st-minute penalty.

When Tector launched a crossfield kick, Adam Strong gobbled it up to make headway until Shanahan chanced an intercept.

It was on a knife-edge. Kilkenny had position. Tector’s drop goal missed right. Newbridge held their discipline and the lead.

1 A beautiful, happy accident - Moneyball is the best sports movie ever
2 Nicholas Quinn: ‘Swimming became how I dealt with grief’
3 Reality Bites – Tales from the new normal: Caitríona Cormican
4 Tokyo Olympics likely to start on July 23rd 2021, reports
5 Is it time for the New England Patriots to tear it down and start again?
Real news has value SUBSCRIBE