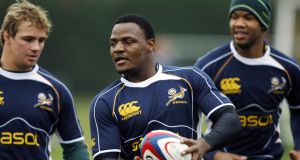 Former South Africa hooker Mahlatse ‘Chiliboy’ Ralepelle has been banned for eight years after he tested positive for a banned substance for the third time in 10 years.

Ralepelle, who received an apology from the South African rugby CEO Jurie Roux despite failing a drugs test after the match against Ireland at the Aviva stadium in November 2010, had the banned growth hormone Zeranol in his system in January of 2019.

The 33-year-old was also banned for two years for anabolic steroids after being caught by an out of competition tester while contracted to Toulouse in 2014.

Ralepelle currently plays for the Sharks in Super Rugby but this ban, running until 2027, will likely end his career although he does have 21 days to appeal.

“The Independent Doping Tribunal Panel handed down its decision in two parts this week on the doping charge against former Springbok and Sharks rugby player, Mahlatse ‘Chiliboy’ Ralepelle,” read a statement from the South African Institute for Drug Free Sport.

“The player tested positive for the banned anabolic agent, Zeranol, during an out-of-competition test on the 17th January 2019.

“The athlete challenged the doping charge and was afforded the opportunity to seek legal counsel to present his case and version of events to the tribunal panel.

“The hearings were adjourned multiple times and were held over a period of six months. The panel reached a decision first on the merits of the case where they found the player guilty of a doping offense.

“Ralepelle had previously tested positive on two separate occasions while playing overseas. The Zeranol positive case was his third positive dope test during his playing career within a 10-year period, however the player’s first positive case was ruled a No Fault decision and he then received a reprimand.

“The panel had to refer to sports jurisprudence to determine the appropriate sanction which they ruled to be the player’s second doping offense.”

1 In turmoil on and off the pitch: Where did it all go wrong for Barcelona?
2 Coronavirus has turned Viktor Hovland into long drive champion
3 Martina Navratilova: A leader in her time, and for ours
4 Sebastian Vettel: This Formula One season could be my last
5 Tactical test awaits Dettori and English King from stall one at Epsom
Real news has value SUBSCRIBE

Sebastian Vettel: This Formula One season could be my last 19:17
French Open set to allow 60% of capacity crowds in September 17:55
Tactical test awaits Dettori and English King from stall one at Epsom 16:09
Six to go forward for Aidan O’Brien in Saturday’s Epsom Derby 15:15
‘Several’ players have withdrawn from snooker World Championship 13:48
Crossword Get access to over 6,000 interactive crosswords