Former London Irish backs David Humphreys, Conor O’Shea and Mark McCall return to the city in charge of their sides 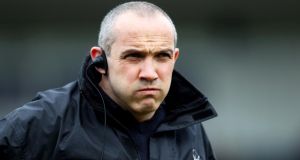 Conor O’Shea (above) is now Harlequins’ Director of Rugby, David Humphreys oversees Ulster rugby while Mark McCall is in charge of Saracens. All three played together with London Irish and remain friends. Photograph: Ben Hoskins/Getty Images

Back in the 1997-98 season, London Irish completed their sixth and last win of their Premiership campaign with a 62-14 win over Harlequins in Sunbury. Everything clicked, Niall Woods converting all eight of the home side’s tries, two of which he scored himself in a 32-point haul. With starting sides that some days numbered 14 Irish players they were fun days for Ireland’s first advance party of professional players.

Also amongst the backline that day were David Humphreys, Mark McCall and Conor O’Shea, all of whom will be in London next weekend, 17 seasons on, as the respective directors of rugby with Ulster, Saracens and Harlequins as the latter host Munster while McCall and Humphreys go head to head in the Heineken Cup quarter-finals.

Back then they were Humphs, Small and Caesar, and still are amongst themselves. “In its own way, it’s amazing really,” admits O’Shea. “Myself and Humphs lived in a house in Hampton Hill, in between Twickenham and Sunbury, and Small was just down the road from us. They were good times. It seems like yesterday, but unfortunately it isn’t.”


Turned professional
The game had turned professional in August 1995, and while continuing his studies in sports science at Brunel University O’Shea joined Irish as they sought to win promotion back to the Premiership at the persuasive behest of Clive Woodward. Humphreys was studying law in Oxford, and half-way through that season Woodward persuaded him to join Irish, where he would become a professional for the ensuing two seasons.

“It was the first real experience any of us had of training full-time and getting used to it being your job and not just for fun,” says Humphreys. “A lot of us went on to play for Ireland but we probably didn’t appreciate that there were a lot of good players in that team and we probably should have done better than we did. But if was a fabulous couple of years.”

“You were young, you were living in London, you had the opportunity to play professional sport and all the experiences that go with living in London. I wouldn’t change it at all. I would have liked a little more success on the pitch but I look back on them as some of the best years I had.”

O’Shea admits it wasn’t just the IRFU that struggled to adapt to professionalism. “That was probably my biggest bugbear at the time in terms of people generally, be it in Irish rugby or London Irish. We always had talent.

“Did we have the preparation then? Now we do, that’s why we’re able to go toe to toe when we’re at full-strength. We’re at a different stage now but I think in some ways that the IRFU, at the time, needed to be tipped into professionalism by people leaving.”


Lagged behind
London Irish, according to O’Shea, lagged behind the culture of clubs such as Leicester, Bath and Wasps, and didn’t have the same squad strength or experience. But when they were good, they could be very good.

“With Clive, all he ever wanted to do was play; run absolutely everything,” says O’Shea. “In one of Crow’s (Niall Woods) first games he scored two or three tries and he went in to the video room feeling pretty chuffed with himself, but all he got was abuse for not running one particular ball. That was the philosophy.

“At the time the way Ireland played was not particularly fun to play in. It was just a kick-chase. There wasn’t much ambition and as an outside back all I wanted to do was try and run, and he gave you that freedom and confidence.”

The following season (’97-’98) McCall joined, with Willie Anderson as coach. O’Shea, Humphreys and Woods all took night classes in French together, though O’Shea admits it was “Del Boy Trotter French”, not least when Jeremy Davidson, who was fluent, set him up with a short speech of thanks to French hotel staff at the end of a Challenge Cup weekend.

“He put in a few words that were, shall we say, risqué. I didn’t know what they were but I could see from the reaction of French people that something wasn’t right, and the boys, who Jezza had primed, were in stitches laughing.”

The arrival of players like Kevin Putt, Brendan Venter and Isaac Feau’nati helped propel them to a sixth-placed finish in the ’98-’99 season with 15 wins out of 26 matches. Venter would also become head coach at Saracens, and Justin Bishop, for a time, was defence coach at London Irish.

‘Very opinionated’
“We were all very opinionated in terms of our rugby and it’s incredible so many from that backline have gone into the type of profession we have,” says O’Shea. “I used to sit down with Humphs and go: ‘If you did get a chance to make an impact would you take it? Because you can’t complain and then when you’re given an opportunity to make a difference go: ‘well, I couldn’t be bothered actually.’ Put your money where your mouth is’.”

O’Shea would not have been especially surprised by anything Humphreys or McCall did. “Both could be top-class lawyers, couldn’t they? They could be doing anything, but it’s just lovely to be doing something you enjoy, despite there being massive highs and massive lows. But you know they’re coming so you get on with it.”

Not his calling
Humphreys wouldn’t have thought it was his calling. “I don’t think any of us thought that far ahead at that stage. I certainly had absolutely no ambitions to remain in professional sport. I thought I was doing it for a couple of years, enjoy myself, and then go back to being a lawyer, which hasn’t materialised.”

Humphreys and McCall returned to Ulster in the summer of ’98 and were immediately rewarded with Ulster’s European Cup win.

“That was the start of the IRFU’s policy of trying to bring Irish players back into the Irish system.

Jonathan Bell and Allen Clarke also came back from Northampton. We went back probably with low expectations and were part of what was, for me, one of the best years of rugby that I ever had.”

O’Shea was the Zurich Players’ Player of the Year, although like Woods – who joined Harlequins in ’99 – he would be forced to retire prematurely with a knee injury to become director of rugby and managing director at Irish, and the highlight of his 10 years at Irish was guiding them to the Powergen Cup, the club’s only senior trophy.

“For the Irish community in London, and I know this might sound trite, to have a team that was Irish driven playing in the Premiership, that’s something that should never be scoffed at. They may now be based in Reading but if we hadn’t gone over and fought those few years God knows where London Irish would be.”

They’ve seen some changes in the game over the last 17 years or more. The biggest?

“Undoubtedly the focus of attention and scrutiny that people come under and the rise in terms of opinion, and the number of players getting involved externally,” says O’Shea.

“The whole thing has exploded as a commercial entity, so people are better prepared, but it’s an incredible pressure cooker, whereas I think the opening years of professionalism the pressure was more localised. Club rugby, through the Heineken Cup, has just become enormous and it’s very exciting to be involved in. I love it.”

Players, O’Shea believes, can switch off more easily and focus on the next task or game. Humphreys concurs, a tad more wearily.

“It’s much better fun playing. There’s no doubt that as you get to this age, or this stage of your career, you realise what a wonderful opportunity it is to get to play. It’s still great to be involved, but you certainly experience the highs and lows of being involved in the sport.”

“We don’t meet up as much as we should,” admits O'Shea, “but the three of us were all in Portugal at the same time and along with our families met up for beer and pizza.

“At one stage, the three of us were in the room on our own and going: ‘My God, did we think in the mid-’90s it would pan out like this?’”

Next Saturday at Twickenham, it’s the turn of Humphreys and McCall to go up against each other. A potential strain on a long-time friendship? “Not in the slightest,” according to Humphreys. “I’ve known Small now for 25 years. He’s been a large part of the different careers I have had, be it club or coaching. A game of rugby isn’t going to change anything there. I still want to win though.”

“It doesn’t make it difficult,” says O’Shea of these also being head-to-heads between old friends, “but I think you would definitely prefer to win,” he adds with a knowing chuckle. “It would make the next time you meet and chat a hell of a lot easier.”