The Irish team punches above its weight, but at provincial level, success is harder to define 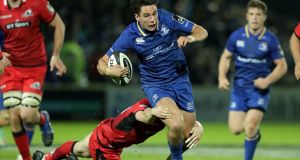 Joey Carbery: His conundrum will find its own solution; elite rugby tends to. Photograph: Morgan Treacy/Inpho

What is success? Dare I wonder, in this professional era, what Connacht coach Kieran Keane’s definition might be? In the beginning of professional rugby, Ulster and Leinster were the kingpins – a role not formally given to them but happily carried for well over 100 years of the amateur era.

The first Irish international was played in 1875 against England where Ireland was made up entirely of Leinster (12) and Ulster (8) players. This season thus far Leinster have played 55 players in all Leinster competitions but with 18 playing in the November series and 20 in the Six Nations, with Ulster dwindling behind as both Connacht and Munster have caught up.

1 Prof Sam McConkey: This is the beginning of the second Covid-19 wave in Ireland
2 Mike Murphy: ‘I won’t do another over-70s lockdown’
3 Blanchardstown, Tallaght top table for highest Covid-19 rates
4 The far right rises: Its growth as a political force in Ireland
5 Police in Australia search for Kildare man previously jailed for killing student
6 Ireland facing at least another year living with Covid-19 - Taoiseach
7 Coronavirus: Public health experts considered idea of moving Dublin to Level 4
8 Fintan O’Toole: It is June 24th, 2025 – and Brexit has worked
9 President Higgins announces death of his dog Síoda
10 Next stop the Champs-Elysées in green for Sam Bennett
11 President Higgins says British must face up to their history of reprisals
12 Explainer: What the hell is going on with Brexit again?
13 The five lies we told ourselves about coronavirus
14 The secret to an airy and light scone with a pillowy interior
15 David McWilliams: Johnson’s UK and Milosevic’s Yugoslavia – spot the difference
16 Life in Level 3: What will happen under new restrictions in Dublin?
17 Why are some in Fianna Fáil unhappy with Micheál Martin?
18 Róisín Murphy: If I want to be famous I can just go to a gay club
19 Wife not entitled to deceased husband's entire estate, High Court rules
20 Aldi empire wracked by family feud
21 Golf group insist they adhered to public health guidelines during Tullamore trip
22 Born to ride, born to win: Sam Bennett, the making of a green machine
23 UCD professor asked to resign from EU committee over Covid-19 claims
24 Building bridges: How polyamory made me a better friend, lover and person
25 Is this the ‘best ever Paul Henry landscape’?
26 Covid-19 is spreading most in deprived areas, the figures suggest
27 Health official cites ‘sufficient evidence’ of cases linked to restaurants
28 Coronavirus: Dublin to remain under Level 3 until October 10th - Taoiseach
29 Male cyclist (40s) killed in north Co Dublin traffic collision
30 Judge’s death raises possibility of third Trump nominee to US supreme court
31 Ross O’Carroll-Kelly: ‘They want us to vacate this place so they can use it as a love shack?’
32 English ‘chumocracy’: Boozy weekends and class disdain with the Camerons
33 Let’s face it, Saracens don’t really care that they are rugby’s most hated team
34 New Covid law sets out stricter rules for event organisers in Dublin
35 Donegal footballer tests positive for Covid-19 forcing squad into isolation
36 Jennifer Rock, The Skin Nerd: ‘I was motivated by people’s perceptions of me as a teenage mother’
37 Stephen Donnelly dodges the questions as Matt Cooper mercilessly pursues the answers
38 Dutch government honours Irish veteran of Battle of Arnhem
39 EU to propose quick deportation of failed asylum seekers
40 Tanya Sweeney: A part of me feels like wanting a second child is being plain greedy
Real news has value SUBSCRIBE