Leinster to up the ante and rediscover European pedigree

Gopperth preferred to Madigan alongside Boss, as Macken braced for Heineken Cup debut 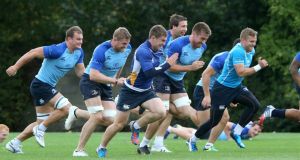 Of all the teams Leinster would have wanted to kick off their latest Heineken Cup campaign, the Ospreys would not be very high on the list. The sides have never met in Europe before but they could scarcely be more familiar with any other side outside of Ireland, and of their nine collisions since the League’s Grand Final in 2010, Leinster have only won two of them.

What’s more, six of those nine encounters have been at the RDS, and nothing about the Ospreys’ latest bout of escapology in the 29-all draw there four weeks ago, dispel the notion that the Welsh region are Leinster’s bogey side. Comments emanating from the home camp before and since confirm as much. Such is the effectiveness of their rush defence, ability to recycle the ball, superb scrum and dan Biggar’s proficiency off the ‘t’ and in playing territory that the Ospreys have long since permeated Leinster’s head space in a singularly irritating way.

Nevertheless, the Ospreys were more fully loaded four weeks ago, with their backline now retained en bloc. This evening’s frontrow was unloaded from the bench then, although that said Alun Wyn Jones, Justin Tipuric and Ryan Jones were not involved. Nor, though, were Cian Healy, Seán O’Brien, Jamie Heaslip and Rob Kearney, as well as Fergus McFadden.

Missing a trio of former and present captains, on foot of losing Johnny Sexton and Isa Nacewa over the summer, unsurprisingly Matt O’Connor has opted to use the greater experience of Jimmy Gopperth from the start, with Ian Madigan dropped to the bench. Joe Schmidt may not be thrilled about that although echoing previous ‘away’ selections under Schmidt, the physicality of Isaac Boss, who has added real oomph off the bench, is preferred to Eoin Reddan. As expected, the third change sees Brendan Macken given his Heineken Cup debut in place of the injured Lote Tuqiri.

Underage days
Being a prospective outside centre hasn’t been the most rewarding of career moves in Leinster, what with the resident occupant of the last 15 years or so, and Macken’s career has never really taken off since his much trumpeted underage days. Often left on the bench for 80 minutes under Schmidt, his game never really developed. This season, though, he seems to be running with more confidence, even if you’d still like to see more heads-up rugby and distribution, although this is also clearly the biggest game and test of his Leinster career to date, especially in defence.

Logically, it’s hard to dispute the Ospreys’ status as marginal favourites for this game. They have the Indian sign over Leinster, their self-belief will be bordering on cockiness, their Euro record at the Liberty Stadium (one defeat, to Saracens two years ago, in their last 22 Heineken Cup games at the venue) is superb, they’re as close to full-strength as makes no difference, while compounding the uncertainty over Leinster with regard to their summer turnover and their patchy form this season to date is the absence of their trinity of leaders, Brian O’Driscoll, Leo Cullen and Shane Jennings. Such a vast array of experience is bound to be missed.

Put another way, if they were all playing you’d be relatively hopeful for Leinster’s chances, but it still would have been a very difficult assignment. Clearly, both Heaslip and O’Brien will have to fill the void and show the same improvement for last week’s outing that Healy did for having had a seasonal reappearance the week before. Their other Lions, Gordon D’Arcy and Rob Kearney, will have a big responsibility as well.

Yet there’s also a few straws of comfort, not least that this is the Heineken Cup as opposed to the League. Clearly, the Ospreys elevate their performance levels for this competition too, especially at home, but Leinster’s Euro pedigree is on a different level. Not alone have they won four European trophies in the last five years, they have won their last 11 matches against Welsh opponents in the Heineken Cup.

The evidence of such quality this season has been scanty to date, but in truth the main difference between this and previous seasons is that they come into Europe on the back of a defeat away to Munster as opposed to having had a home win over the same opponents, and they couldn’t go on winning at Thomond Park for ever. While the scrum and reshuffled defence remains a concern, somehow you sense they should have learned a lot from that drawn game, up their breakdown work considerably and rediscover their European pedigree.