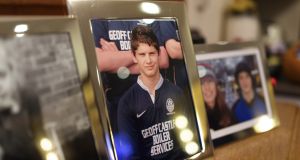 James was one of five Kennedy brothers. They loved their football. They used to say in Hamilton Street, in south Belfast that the Kennedys were their own five-a-side team. On February 5th, 1992 James was in Seán Graham’s bookmakers on the Ormeau Road, when two men entered the shop. When they stopped spraying bullets, James lay dead, one of five people killed. He was 15-years-old.

His broken-hearted mother Kathleen stopped eating and refused to leave the house. She gave up loving life and died two years later. It was James’s dad Jack, who said one of the most memorable lines in Joe Duffy and Freya McClements’s book Children of The Troubles, words that are inscribed on the memorial stone erected on the 20th anniversary of the atrocity.

8 Q&A: Covid vaccine side effects – What are they, who gets them and why?

11 Food and mood: Why nutritional psychiatry is attracting attention

13 Galen Weston, owner of Brown Thomas and Arnotts, has died

20 Michael McDowell: We have to stop pressing for a border poll

22 Q&A: What now for AstraZeneca and Johnson & Johnson vaccines?

23 My ex-husband wants me to sign away my land to him. Do I have to?

24 Hyundai i20: Korean overtakes some of its rivals in the supermini race

28 Gordon D’Arcy: Béibhinn Parsons is the gift, IRFU must now do the giving

31 The Khmer Rouge controversy: Why colourising old photos is always a falsification of history

34 Maternity leave during lockdown has its advantages

35 Rosita Boland: I stood under a tree in case Goldilocks showed up