Ireland still need to be wary of French threat 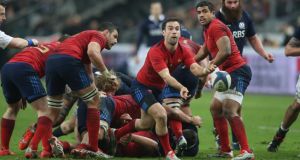 It is believed the French are considering promoting Morgan Parra at scrumhalf to start against Ireland at The Aviva Stadium on Saturday. Photograph: Getty Images.

No games seem set to define Ireland’s calendar year, and perhaps even the Joe Schmidt era, more than the meetings with the French. It was in Paris last March that Ireland’s first win in seven attempts ensured an overdue Six Nations title and were they to back that up in the Aviva Stadium next Saturday it would go some way to ensuring Les Bleus are not quite the nemesis of recent times when they meet in the World Cup in October.

First and foremost this looks like a Grand Slam and perhaps even a title eliminator, on the fairly safe presumption it is preceded by an English win over Italy at Twickenham.

Stuart Lancaster’s well-coached side undoubtedly laid down the most complete and eye-catching marker with their comeback win over the Welsh in the Millennium Stadium and will almost certainly be coming to the Aviva in their potentially pivotal round-three clash with two wins from two.

Not that a French performance has much bearing on what will happen with them a week later, much less eight months. Their form has been uninspiring and underwhelming during the tenure of Philippe Saint-André and backs coach Patrick Lagisquet, hardly surprising given their respective Toulon and Biarritz were largely devotees of a fairly risk-free, tight, and territory-based games which sought primarily to build a scoreboard based on three-pointers.

Yet they retain a capacity for inspired, emotionally charged, one-off performances, and when liberated and perhaps with nothing to lose, of throwing caution to the wind. So it was that when under fire from critics at home, France produced their best performance, and certainly their best half, in the second period against Ireland in that finale in Paris.

So it was that they avenged their 3-0 Test series summer whitewash in Australia by beating them 29-26 at the Stade de France with a largely rebuilt and seemingly liberated side last November, only for all that intensity to drain away in an 18-13 loss to Argentina a week later.

That can happen to any side, and often has done to France, when faced by a determined Pumas side, all the more so on a gluepot of a pitch and if Argentina gain a lead, for they are one of the best at building up through drop goals and penalties and then maintaining it.

Yet viewed in that light France’s performance in their 15-8 win over Scotland last Saturday was decidedly anti-climactic and left a growing number of disaffected French rugby fans even more disillusioned. On a fairly uninspiring opening weekend, the tally of tries was a measly six – less than half the average for a first round and the lowest total since 2005.

France did manage the most line breaks (five) and offloads (15) of any team in the tournament but were again largely devoid of their once famed invention or creativity, and could not score a try. Given this was the first major sporting occasion in Paris since the Charlie Hebdo massacre, so much more had been expected after a predictably loud rendition of La Marseillaise.

As in the autumnal games, they did show ambition initially with a running game before their pack ran out of puff and they conceded the Scottish try by Dougie Fife. Against Australia, they had also let the Wallabies back into the game when conceding 10 points in the last nine minutes of the first half.

They do undoubtedly have good players, and plenty of physical power, especially up front, and all the more so when they bring the La Rochelle prop Uini Atonio and Toulon lock Romain Taofifenua off the bench.

The 24-year-old Atonia hails from Rotorua of Samoan parents, and having joined La Rochelle in 2011 in the Pro D2, made such strides as an all-round player and leader for the team that he became their captain.

Damningly though, France could not score a single point, much less a try, in the 10 minutes that John Beattie was sin-binned, even suffering the indignity of seeing their pack being walked backwards a good 20 metres by the undermanned Scottish pack.

Saint-André is expected to recall Vincent Debaty and Nicolas Mas at loosehead and tighthead, and it is also believed that the coaching staff are considering promoting Morgan Parra at scrumhalf ahead of Rory Kockott and Brice Dulin in place of Scott Spedding.

But it would be no surprise, either, if Saint-André stuck with Kockott for his greater physicality and running game in an effort to restrict the Irish backrow. In other words, France will bring more of the same to Dublin, the riddle as ever being just how effective they will be.