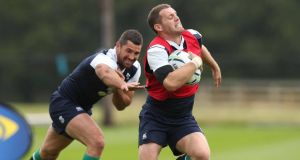 Ulster centre Darren Cave has said the pursuit of a place at the Rugby World Cup took over his life. Photograph: Inpho

A place on the bench in Twickenham can bring its own strains. But at least Darren Cave is there. He’s on the plane. He’s in the squad. He’s got his ticket and this weekend he’s on the pitch.

In the Joe Schmidt world it came down to the coach wanting to have a specialised centre, specialised in a rugby world where the race is so often to be ubiquitous and utilitarian. Jared Payne, Robbie Henshaw, Luke Fitzgerald, Keith Earls, all fullbacks or wingers or centres.

“It was a stressful week. I knew I was in with a decent chance but I was also aware that it was competitive in the backs and it could have gone either way so I was delighted,” says Cave.

“But it’s a great opportunity. I feel my form was pretty good at 13 at the start of the year and then at 12 and the end of the year alongside Jared. Then the couple of runs I’ve had this year, one at 13, one at 12. I think they went pretty well. I’m hoping to get back on the pitch soon.”

Hopefully and probably the chance will come on Saturday. It’s an England pairing of Brad Barritt and Jonathan Joseph, if they are still on the pitch when Cave is introduced. It’s their first start together in the ever changing England midfield.

Cave was one of the players probably on the cusp of Schmidt’s selection and fell on the right side of the coach’s byzantine permutations. But the 28-year-old sees his elevation coming from Ulster’s push for honours over the last few seasons. Seven of the 31 players, Cave, Rory Best, Iain Henderson, Chris Henry, Paddy Jackson, Payne and Tommy Bowe are from the Ravenhill Road stable.

“Yeah, it’s not a bad effort and testament to the work that has been done over the last few years. Neil Doak (Ulster coach) always talks about when the team does better more players end up in the national squad.

“I think the last four years Ulster have gone much better than in the past. They’ve been very competitive with some overseas players that have helped. But there has always been a core of Irish players there who are now getting their reward.”

Cave concedes that the pursuit of a ticket to Cardiff for Ireland’s first pool match against Canada in the Millennium Stadium has consumed his life for most of this year. He knows too that by the next tournament in 2019 he would be a ripe 32-year-old centre.

“It was a relief to hear something in the end because it has taken over my life a wee bit, the last couple of months,” he says. “My brother got married on Friday. It was nice to get a day away off for the wedding but it almost snuck up on me because I hadn’t been looking forward to it that much because I’d been worried. Was I playing here was I getting picked there…

“It really has consumed my life for the last few months and everyone has been talking to me about it and asking me about it so it’s good now that I have some clarity and I can put a line in the sand and get on with things.”

Schmidt hasn’t spoken to Cave in detail about the role. That can wait. His initial position will be to back up Henshaw and Payne, although, in the earlier pool games there will be latitude for change. But already that’s too far ahead.

“We arrived in camp by lunchtime Monday and straight away I’m not dwelling on the whole World Cup, ” he says.

“I’m worrying about what’s coming. There’s a game against England coming this weekend so that’s very much been the focus and will be the focus.”

There’s always a down side. But even there the tendency is to move quickly forward. Andrew Trimble was the main Ulster player to miss out. Cave has been there before on the wrong side of selection decisions and he’s reluctant to say too much.

“For me I won’t say too much about Andrew,” he says. “I don’t want to be seen to patronise him. I do feel for him but at the same time there have been times in the past where I have missed out on the back of other people so there’s no point on me now dwelling on it.”