Twickenham an imposing testing ground for Byrne and Carty 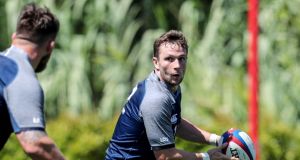 Jack Carty: named among the replacements against England at Twickenham. Photograph: Dan Sheridan/Inpho

The shoot-out between Ross Byrne and Jack Carty for a place in Ireland’s 31-man World Cup steps up in earnest against England at Twickenham tomorrow, while Jean Kleyn’s second successive start suggests he may elbow out one of the other more established locks in the party.

The anticipated names of Kleyn and Byrne were the most eye-catching in the match-day day squad unveiled by Joe Schmidt before they moved from their warm-weather training base in the Algarve to London.

The Irish head coach confirmed that both Byrne and Carty, named among the replacements, will both see game time in Twickenham and quite possibly a week later against Cardiff in Wales as well.

The 31-man squad has to be submitted to World Rugby by the Monday following the Cardiff game, September 2nd, although it will not be unveiled publicly until after the return match in Dublin on September 7th.

Or course, it could be that both Byrne and Carty will ultimately make the cut should Joey Carbery’s recuperation from an operation on the left ankle he injured against Italy not clear up to the coaching staff’s satisfaction.

However, there’s been a big investment in Carbery’s development in this cycle, and Schmidt seemed relatively positive about Carbery, who was working with the conditioning staff at pitchside in Quinta do Lago yesterday, in also highlighting how he offers invaluable versatility.

“I know Joey well and I’ve got a lot of time for Joey. One of the frustrations for us is that versatility Joey gives us. The other three 10s tend to be locked on 10s. Joey can play 15 and 9, that’s massive in a World Cup squad. I think 31 is a very skinny squad when you’ve got five- and four-day turnarounds in a tournament.

“When player management and player welfare is being trumpeted as the number one priority, it just seems that that’s at cross-purposes with that. But it does force you to consider someone of Joey’s talent and flexibility, even if you don’t think he’ll get that last Wales game as a lead-in, but you think he’ll be fully fit for the Scotland game.

“Part of that equation is how the two lads go this weekend because it’s a contest, everyone is in that competition for spots. Joey has progressed well this week, but we have to be patient. It’s the next two weeks which will really determine whether he’s up and running.”

“If he gets back for the Wales game we know he’s good. If he doesn’t, if he’s not looking like he’s getting up and running – because we have to name the squad before that – then we’ve got a decision to make. And as I said part of that whole conundrum is the two lads who get to play this weekend and that’s part of the logic in giving them the opportunity.”

Kleyn was partnered by Devin Toner against Italy, with the latter on the bench as Iain Henderson comes into the second row. James Ryan, the one nailed-on lock, is being held back, with Tadhg Beirne again picked for his versatility and impact off the bench.

That seemed telling, as did Schmidt revealing: “We gave him [Kleyn] some things to work on from last time and we want to see if those can materialise on Saturday. Because he’s so new in, we felt that it was a priority to give him the time.”

Allowing for the absence of Johnny Sexton and James Ryan especially, it’s a strong-looking Irish team, but the same can assuredly be said of Eddie Jones’ selection.

Tom Curry and Sam Underhill will line up either side of Billy Vunipola in a revamped mobile back row, while Owen Farrell makes his seasonal reappearance at inside centre, as Jones renews the George Ford-Farrell, 10-12 axis.

“I think there’s always a risk of losing confidence if you don’t get a result but we would be less result-focused than process-focused,” said Schmidt.

“We’d look at what we did well, what we need to do better, and whether we win or lose we’re still looking at those things and trying to make sure we do things better, as well as trying to maintain and even fine-tune the things we did well.”

“It would be a real boost,” said Schmidt, were Ireland to win, as they did when clinching the Grand Slam on their last visit to Twickenham in March 2017.

“The last time we played there, it was minus five degrees. There’s very much a turnaround with 28 degrees expected, so can we keep the heat on them? I’d certainly love to see it.”

“Because that is still the most important thing – no one’s going to throw any accolades at this team for winning on Saturday and losing against Scotland on the 22nd of September. For us, we’re of that same mind – it is all about what happens in four weeks’ time, not what happens in this week.”

1 America at Large: Hurling fan Dowling leading the fight against Covid-19
2 Conor McDonald: ‘People in fitness industry need to be careful what they put online’
3 Alex Ferguson pays tribute to ‘magnificent’ NHS
4 Germany well ahead of the curve as Bundesliga gears up for return to action
5 Joanne O’Riordan: The deep comfort of the simple daily sporting ritual
Real news has value SUBSCRIBE