Tommy O’Donnell out of Rugby World Cup with dislocated hip 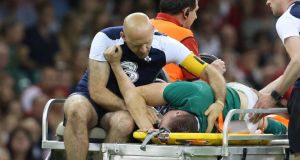 Tommy O’Donnell has been ruled out of the World Cup after dislocating his hip in Ireland’s warm-up win over Wales. Photograph: Inpho

The desperately unfortunate Tommy O’Donnell faces a long road back to the game and an uncertain future after an IRFU statement on Monday confirmed the 28-year-old Munster openside sustained a dislocated hip in last Saturday’s win over Wales at the Millennium Stadium.

O’Donnell suffered the injury when landing on his knee in a double tackle, with both Welsh players landing on top of him, and was attended to for four minutes and received oxygen before being stretchered off. It is understood that his hip was put back in place at the University Hospital Wales on Saturday night, but the extent of the internal damage to his ligaments was not revealed.

The brief IRFU statement merely said: “Investigations at University Hospital Wales yesterday afternoon confirmed that Tommy suffered a hip dislocation in the game against Wales. He will be limited to non-weight bearing activity for at least 6 weeks and has unfortunately been ruled out of participating in RWC15.”

Similarly, all the statement revealed about Andrew Trimble’s suspected foot spasm, was the following: “Andrew will have a precautionary scan on the foot injury he sustained against Wales.” In the aftermath of the game though, Joe Schmidt said the injury was not thought to be serious.

The same is certainly not true for O’Donnell, who had been forcing his way into contention with the scale of his performance. Akin to a shoulder dislocation, further dislocations can occur, and the extent of the damage and the degree to which it may trouble him in the future, will only become apparent after he returns to rugby related activities.

One imagines, for example, the re-introduction to weight training will have to be gradual, and the same will be true of any contact work on the training ground and subsequent match play. It must be an horrendously difficult time for him and his family, and was a cruel reward after reportedly getting into the shape of his life to make that World Cup squad.