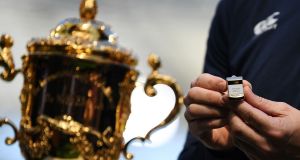 Referee Nigel Owens holds the whistle that will be used in the opening Rugby World Cup match, alongside the Webb Ellis Cup. Photograph: Charly Triballeau/AFP/Getty

The wait is finally over. The 2019 Rugby World Cup gets underway today, with hosts Japan taking on Russia in the tournament opener in Tokyo (kick-off 11.45am Irish time). This year’s edition is widely considered to be the most open in history, with at least six sides harbouring legitimate hopes of lifting the Webb Ellis Cup on Sunday November 3rd. Among those teams are Ireland, currently ranked the world’s number one nation, and Gerry Thornley believes their claims are justified. From Yokohama, he writes: “They have world class operators in Tadhg Furlong, James Ryan, Conor Murray and Johnny Sexton, plenty of quality around them, a smart coaching ticket and improved strength in depth. Admittedly, a prospective quarter-final meeting with New Zealand or South Africa is as tough a draw as possible.” However, he suggests that despite the tournament being up for grabs - Ireland, England, the Springboks, Australia and Wales all look potential winners - one side still look like they’ll take all the beating. “The All Blacks have come back to the back, and the peleton have closed the ground on them. But they’re still the team to beat.”

Ireland get their tournament underway on Sunday against Scotland in Yokohama, with the winners putting themselves in pole position to top Pool A. Joe Schmidt has revealed his starting XV for his side’s opener this morning, with Jordan Larmour and Andrew Conway named at fullback and on the wing respectively, in the absence of Rob Kearney and Keith Earls. There is also no place in the matchday squad for Joey Carbery, with the Munster outhalf being given an extra week to regain full fitness ahead of the second Pool A clash against Japan. Kearney’s absence will be a blow, especially given the wet conditions expected on Sunday, and it leaves Ireland with relatively inexperienced back three. Gerry Thornley writes: “Between them they have started 36 Tests, with the 23-year-old Stockdale by some distance the most experience having started 21 of them. As a back three, this trio have only ever started one game together before, namely in that win over Italy in Chicago in November last year when Larmour scored three tries in a 54-7 win.” Meanwhile in his column this morning Liam Toland has suggested the RWC schedule gives Ireland a “50-50” chance of reaching the semi-finals, with Joe Schmidt having the chance to rest key players for the final two pool fixtures - providing they can negotiate a route past Scotland and Japan first.

1 Covid-19: Hairdressers, gyms and religious services could return next week
2 Bloomberg ranks New Zealand top in fight against Covid-19 - but how did Ireland fare?
3 The beginning of the end: 10 things to know about Covid-19 vaccines
4 Q&A: When will we know more about plans to exit Level 5?
5 How to gift your child a house deposit . . . tax free
6 Alison Curtis: My guilt at not going for a second pregnancy
7 Sit back and soak in Blackrock villa with hot tub out back
8 BOI customers to be charged twice with bank fees on New Year’s Eve
9 400 – yes, 400! – Irish retailers for all your online Christmas shopping
10 Value of gardaí examining RTÉ retirement party queried in Seanad
11 Fintan O’Toole: Our Government should be a fox. It is actually a snake
12 Man sexually assaulted two women in Dublin days after release from jail, court hears
13 Donald Trump directs team to co-operate on Biden transition
14 Brexit: Rush for last-minute deal to let sausages into North
15 Man jailed and fined for not giving evidence in Aaron Brady murder trial
16 Gerry Thornley: Ireland don’t want to box themselves into a corner
17 Owen Doyle: Ireland suffered from officiating of the breakdown
18 Covid-19 vaccine: ‘I’ll be first in line,’ says Luke O’Neill
19 Judge rules against €500m Clonshaugh wastewater plant
20 Exiting Level 5: Ministers to push for reopening of shops, restaurants and churches next week
21 Decades of work and a bit of luck drove Oxford vaccine success
22 Donna Hay’s quick and simple one-pan stand-by dinner
23 No further players to be called up to Ireland squad to face Georgia
24 Ryanair warns it may reduce more services and relocate operations
25 Concern over high number of care staff failing to show for Covid-19 tests
26 Hospital and HSE apologise over young woman’s death from brain bleed
27 Vitamin D supplement advised for older people
28 Patrick Freyne on Christmas ads: ‘No one belongs on the naughty list.’ This should be big news
29 The Irish ice-cream maker who was diagnosed with diabetes
30 Son putting elderly dad under pressure to sign over land
31 Many exalted western values rooted in Christian tradition
32 Bush fires, Brexit and Fox News make 2020 pivotal year for Murdoch
33 Appeal court orders drink driver to pay €20,000 fine by New Year’s Eve
34 Irish designer of Oxford vaccine: ‘I’ve never worked so hard in my life’
35 Talks on new pay deal for more than 340,000 State workers to begin
36 Kevin McStay: Maybe a knockout All-Ireland Championship is the long-term solution?
37 Cabinet approves €108m for restoration of midlands bogs
38 Boeing seeks dismissal of Norwegian Air’s €1bn lawsuit over Max aircraft
39 Workers have little idea of the cost of retirement income
40 Thomas Galligan and Cavan raring to meet Dublin in Croke Park
Real news has value SUBSCRIBE