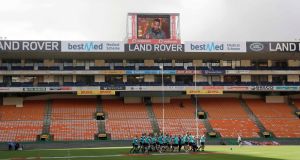 While this may be a remodelled, more multi-racial Springboks which runs out into a virtual 46,000 sell-out at Newlands, with talk of a more expansive, ball-in-hand game – as former Irish forwards’ coach Gert Smal forecast when visiting the Irish team hotel during the week – some things will never change with a Springbok team.

First off, as a rule, a game of rugby is a fight, and never more so than when confronting the Springboks, and especially so on South African soil. That goes with the territory. End of.

So for all the talk of the Springboks turning over a new leaf, they certainly will never be inclined to turn the other cheek. “Go non-racial Boke, go” implored the Cape Times yesterday. And that was the front page of the paper, and the day before the game!

Yet while this may be a remodelled, more multi-racial Springboks under new coach Allister Coetzee which runs out into a virtual 46,000 sell-out at Newlands, with talk of a more expansive, ball-in-hand game – as former Irish forwards’ coach Gert Smal forecast when visiting the Irish team hotel during the week – some things will never change with a Springbok team. It will be physical.

The game may have tidied up its act since days such as the Battle of Pretoria, in Ireland’s second most recent visit here, and the finale to their gruelling seven-match, two-Test 1998 tour. But that has only made the fight more legitimate.

The lines in the sand for this match and this series are likely to be drawn by the first collisions at the breakdown, the first scrums and the first mauls. That’s when the Boks will find out if Ireland are up for the fight. Lose them and it will be both a longer day at the office and a longer tour.

Knowing this full well themselves, it will be a surprise if Ireland aren’t up for it, and equally intent on taking the game to their hosts. They may also be remodelled, but they probably needed a degree of freshness and eagerness, even if that might come with some naivety. Andy Farrell’s input ought also to have injected the defence with a fresh intent, and we’ll see what else.

Issues in the past

Thankfully, it should be a good day for rugby. The forecast come kick off is for temperatures of around 12 or 13 degrees, and a bit breezy, but dry.

For all the talk too of Springbok retirements and Irish injuries, each has six of the pack which started their most recent outings.

Ireland has an untried 10-12-13 combination of Paddy Jackson, Luke Marshall and Robbie Henshaw, but then the same could be said of the Pat Lambie, Damian De Allende and Lionel Mapoe axis. But with nine tries in Super Rugby this season, Mapoe’s speed and lines of running look decidedly dangerous.

They look equipped to do damage, but then so too do Ireland. Jackson is in form and so too all those outside him, and in their best positions too, pretty much, including Jared Payne.

With Jackson, Marshall, Andrew Trimble and Payne on a proven wavelength, Ireland will surely use the outhalf’s passing repertoire on the gainline. He looks more ready than he’s ever been.

To this untried midfield mix can be added the Boks’ debutant scrumhalf Faf de Klerk, albeit his bullet pass has echoes of Aaron Smith. Hopefully de Klerk won’t be that good. He is even more inclined to take a quick tap or have a dart, though that may be tempered on his debut.

Each has bench impact too, even if tempered with a degree of inexperience (five of Ireland’s replacements have less than seven caps). In any event, Conor Murray is a comparative veteran and big-game player whose physical attributes are just what’s required.

Then, more importantly, there’s the crafty Joe Schmidt factor at the helm of a strong coaching ticket, even if their work on the training ground has been limited in order to revive some “fatigued” bodies.

The Boks and their media are seemingly as conscious of this, with regular recollections of how Ireland outsmarted them in November 2014.

But that was November in Ireland, and this is June in South Africa, when and where Ireland have lost all previous Tests.

Given the Boks are likely to improve as the tour progresses, and next week’s second Test is at altitude in Johannesburg, this has always looked like Ireland’s best shot at making a game of things and the series.

If they are still in the contest at the half-way mark, things could become very interesting indeed. For if there’s even a hint of brittleness in this Boks team, then that’s when it is liable to come.

It should be interesting. There are plenty of unknowns. It will be a surprise if Ireland don’t have at least one big performance in them on this tour, and if produced here it could even precipitate one or two more.

There could be a few tries in this one. Ireland might even rattle the Springboks cage, even if a win would, truly, be something else.