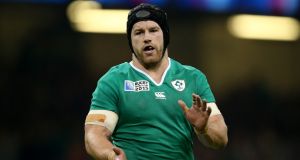 New championship, new challenge, new captain and even something of a new dawn. Ireland enter unchartered territory in the Six Nations, their first without either of those two blokes named O’Connell or O’Driscoll since 1999. Time, then, for new totemic figures.

The most experienced member of the current squad, Rory Best, has inherited the captaincy but as Seán O’Brien acknowledged yesterday, it’s also time for others to assume more leadership.

As a contender for the captaincy himself, and as a player with 41 Tests who will turn 29 on St Valentine’s Day, the day after Ireland play France away, O’Brien includes himself in that category.

“Yeah, I would, absolutely. I want to be a leader within this environment. That means I have to have all my ducks in a row and make sure I’m performing as best as I can and letting the other people around me see that. Nothing really changes for me in terms of what I want to do on the field . . .”

Indeed, insomuch as what he does as what he says, O’Brien will become an O’Connell-type rallying figure for pack, team and crowd alike, ideally with the kind of big plays at big moments that, no less than O’Connell, typifies his game too.

Admittedly, there remains plenty of familiarity, even if it must seem strange without O’Connell’s uber-demanding presence in camp. Speaking at Carton House, O’Brien quips: “It’s kinda good. He doesn’t stare at people anymore and intimidate us as much.”

“I think the bigger picture is fitting into this team and doing what you can for the players around you. That’s been the case the last few years and nothing is going to change that now. Players come and go and as everyone knows another few went last year. You just have to move on, get back down to work, and kick on.”

No player came away from the World Cup with a more antic-climactic sense of disappointment than O’Brien, given his one-match suspension for the quarter-final loss to Argentina for punching Pascal Papé.

“I don’t know if I’m more revved up, but I certainly learned, I think, from that match to take those situations out of my game. And, you know, not react the way I did.”

Keen to draw a line under that episode, when pushed further, O’Brien admits: “I need to learn from it and kick on . . . Things happen in games and it’s something I’ve said I wasn’t that proud of at the time, but I can’t keep kicking myself over it. I probably did for a week or two afterwards but you have to look forward and learn from your mistakes.”

He says that the infusion of new players, such as the similarly equipped CJ Stander, who has “not been shy” in training, has added to the freshness and excitement within the camp.

Offered a shot at an historic third title in a row, O’Brien accepts that Ireland’s schedule could hardly be tougher, with France to come in Paris six days after Sunday’s opener. O’Brien is as familiar as anyone with Wales, and their backrowers, all of whom he toured with on the Lions’ trek to Australia.

Dan Lydiate is a fellow farmer, with whom he remains in contact, and then there’s Sam Warburton, Taulupe Faletau and Justin Tipuric.

“The first thing they bring is that huge physicality . . . They have a good kicking game. They’re good in the air. They’ve a big pack. They’ve a great backrow. They’ve a lot of strings to their bow. The physicality one is one which they pride themselves on. It sets the tone for them.”

As expected, the IRFU confirmed that Luke Fitzgerald has effectively been ruled out of another Six Nations with the medial ligament tear he sustained in an innocuous tackling drill at last Friday’s open session at the Aviva, and which, cruelly, has sidelined him for six to eight weeks.

Arguably Ireland’s stand-out performer against Argentina, team manager Mick Kearney admitted that Fitzgerald had maintained that form in midfield for Leinster since then.

“He certainly would have been the forefront of Joe’s thoughts. Whether he would have got picked or not is difficult to say. There is a lot of competition there . . . But certainly from a squad point of view and even from a leadership point of view, Luke’s a big loss to the squad.”