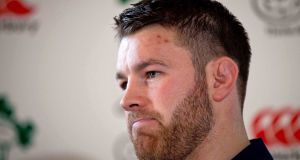 Seán O’Brien missed Ireland training on Wednesday morning with a tight hamstring ahead of Sunday’s opening Six Nations Championship match against Wales at the Aviva stadium.

The Leinster flanker sat out the session as a precautionary move and he will be monitored by the medical team ahead of Friday’s Ireland team announcement.

O’Brien didn’t take part in the Ireland training session at Carton House, rested in a precautionary move after complaining of a tight hamstring following Tuesday’s practice.

The Tullow native is expected to resume training on Friday as Thursday is a rest day for the Irish squad. Ireland’s forwards’ and currently interim defence coach Simon Easterby explained: “Everyone (trained) apart from Seán (O’Brien). He stood out; it was more precautionary than anything.

“We’ve got Friday and Saturday, because we’ve got a longer week this week we’re into the Sunday game. So we’re in a good place; we feel pretty comfortable.”

Easterby elaborated on O’Brien’s injury. “A tight hamstring, there’s nothing unusual there. You’ve just got to manage him. He’s got a down day tomorrow and he doesn’t have to train again until Friday, so we’re pretty comfortable with the amount of work he’s got in in the early part of this week and last week to feel that we could manage his tightness.”

Luke Fitzgerald’s misfortune - he misses the Six Nations with a medial ligament injury suffered in an opening training session last week - saw Ireland coach Joe Schmidt call on Garry Ringrose to train with the squad on a temporary basis.

Easterby explained: “We haven’t replaced Luke Fitzgerald yet, so Garry Ringrose came in to cover for him because Leinster have no game this week. We’re pretty happy with where we are in terms of guys’ availability from the original squad.

On his own expanding duties Easterby admitted: “I think we’ve been sharing the role (of defence coach); myself, Joe (Schmidt) and Richie Murphy was always working with Les (Kiss) a little bit as well in the last couple of years. It’s working well and we’re sharing that responsibility.

“We’ve had a really good defensive record the last couple of seasons. There are certain things we wanted to tweak, at most, since the World Cup and we’ve done that. We had a bit of time together as a squad and we’re trying to build that little bit of cohesion after coming back together after a long break after the World Cup.

“But in terms of what the players have brought to the table, in terms of them buying into a couple of the new things that we’re looking to put into place, it’s been really productive.

“I think there are clearly things in that (Argentina defeat at the World Cup) that we didn’t get right, both sides of the ball, whether we were in attack and we had opportunities or whether we were without the ball; we offered Argentina chances to expose us.

“If we had had a game the week after I think we would have rectified that. We didn’t; we had to wait a long time before we could look at trying to rectify some of the issues we had that day.

“That’s what we’ve been able to do since we came into camp last week and certainly when we met just after New Year as well we were able to identify a couple of those things.

“It was tweaking them, not wholesale changes, just trying to fix a few issues and the players have bought into what Joe and I are trying to put into place. It’s been a productive couple of weeks.”

The Ireland team to play Wales will be announced on Friday lunch-time.

1 Dan Tuohy explains ‘rotten to the core’ comments
2 Eddie Jones’s comments have already provided Irish team-talk for 2021
3 Questions raised over Ireland v Italy fixture due to coronavirus
4 Six Nations: No place to hide for Ireland’s misfiring captain
5 McIlroy takes his foot off the pedal and will skip the Honda Classic
Real news has value SUBSCRIBE

City Island to return to hurdles and take on Paisley Park in stayers’ 20:50
McIlroy takes his foot off the pedal and will skip the Honda Classic 20:01
GPA asks delegates to vote against hurling black card at congress 18:33
Dan Tuohy explains ‘rotten to the core’ comments 18:08
Serie A matches to be played behind closed doors due to coronavirus 17:54
Here is your handy guide to sport on television this week