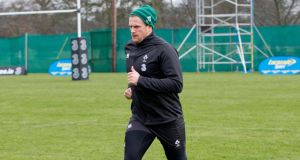 Jamie Heaslip remains a doubt with a shoulder injury. He has not finished any of his last three Leinster matches. Photograph: Morgan Treacy/INPHO

With Jamie Heaslip appearing to look more and more of a doubtful starter for Ireland’s Six Nations opener against Italy, and thus most likely to be replaced by Jordi Murphy, the odds on Seán O’Brien being pitched straight back into the starting team are shortening by the day.

In a relatively fluid selection scenario up until tomorrow’s team announcement, Conor Murray yesterday also declared himself fit to play his first game since being sidelined with a neck injury in early January.

Perhaps partly as a result, Ian Keatley is seemingly pressing Ian Madigan hard for the number 10 shirt as Joe Schmidt considers starting the Munster halfbacks in the absence of Johnny Sexton.

There was no update on the wellbeing of Heaslip and Cian Healy after training at their Carton House base yesterday afternoon, fuelling suspicions that Heaslip is still being troubled by a shoulder injury.

“He, like the others who have question marks over them, has to get through today,” forwards coach, Simon Easterby, said of Heaslip yesterday prior to training.

“He is a pretty impressive healer. He doesn’t get injured much but we have to make sure that we go to Rome with players capable of getting through 80 minutes. We don’t want to go there with players who are potential risks in a Test match.”

Then again, they would say that, wouldn’t they? To do otherwise, ie to admit they were using this fixture to further ease players back to full fitness, would be an insult to the Italians. But against that, Healy, O’Brien and Heaslip are all world-class, and if Ireland don’t use Healy and O’Brien in some capacity this weekend, they would be even rustier for next weekend at home to France.

Mindful that the Six Nations is more a mini-marathon than a sprint, they may also take the view that it would be better to have Heaslip right for the remaining four games, than risk him this Saturday. Were Heaslip replaced by Jordi Murphy, whose four Test appearances include just two off the bench in the Six Nations, this may reduce the likelihood of also starting Tommy O’Donnell, and make picking O’Brien from the start more desirable.

“With his injury, if he is going to be involved you have got to make sure that he is not going to come off. It might be difficult sometimes to pick a player who is coming back from a bump and such a long lay-off. It probably doesn’t help you guys but we have to get through today’s session before we can make an assessment on Seán and a few others. Jamie included.”

“You have got to make sure that you don’t put the team in a vulnerable position if you have a player like Seán who is coming back from a long lay-off. His last [Test] match was against the All Blacks 14 or 15 months ago. If he’s right he’s right and we’ll know that hopefully in the next couple of hours,” said Easterby prior to training. But if they did know in the ensuing hours, they weren’t of a mind to share the information.

His return is a particularly welcome boon given the absence of Sexton, and has seemingly increased the likelihood of him renewing his provincial partnership with Keatley, for whom this would be a first Six Nations game.

While Madigan has more experience, and saw the ship home in the second Test in Argentina, he has only started three tests.

Looking ahead to his first Six Nations campaign as forwards coach, Easterby said: “The autumn was a good opportunity for me to get back in the environment in a different role, I’m also pretty driven and I don’t think everything was perfect in the autumn from my perspective.”

“Me and Feeky [scrum coach Greg Feek] have been working hard on trying to improve certain aspects of our forward play. Hopefully we will see some of that work come out in the next couple of weeks.”