‘I did say to him that I wanted to play every game. I don’t want to be managed.' 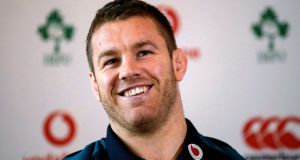 There were a number of considerations that informed Seán O’Brien’s decision to sign a three-year contract to join London Irish after this year’s Rugby World Cup in Japan.

When an IRFU contract was not forthcoming it opened a path for the 32-year-old to look outside of Ireland, and the potential of agreeing a financially lucrative deal.

There were a number of suitors, but an affinity and respect for the man who gave O’Brien his first Irish cap against Fiji at the RDS in 2009, the current director of rugby at London Irish, Declan Kidney, simplified the choice once the figures added up, both in terms of length of contract and remuneration.

Kidney offered a vision of the Exiles post-English Championship apocalypse if and when they reclaim their Premiership status for next season, and the role that he believes the Lions, Leinster and Ireland international will fulfil in that evolution in helping to develop young players and enhance the rugby culture.

The personal relationship was an important factor, said O’Brien. “Deccie gave me my first cap, so I’ll always be very grateful for that. I always liked Deccie’s way of man-managing people, I think that’s one of his best traits.

“He’s quite funny the way he goes on, but there hasn’t been much discussion about I suppose life after Leinster or anything like that until now. It was just general chit-chat. I always got on with him, but it wasn’t the case we were calling each other every weekend or anything.”

Leaving Leinster is the collateral damage, one that by his admission was emotionally draining, yet the process, relatively speaking, was mercifully swift.

“There have been a few tears shed over the last few months thinking about all of this. When you do make your final decision, it’s a tough place. At the end of it all you’re just packing your bags, walking out the door and moving to a different club. It hasn’t been that easy, but it is what it is. You back yourself to go over there and do a job.”

O’Brien pushed for a third year when negotiating the contract. “If I didn’t think the structures were in place over there to succeed, or to give everyone a chance to succeed, I wouldn’t be pushing for that. But with the plan he [Kidney] has, and with the players they are trying to get and so on, it will be a hugely exciting place.”

Stepping outside the IRFU’s player-management programme for the first time in his career and into the relentless physical demands of the Premiership will be a challenge, but it’s one he’s ready to embrace.

He pointed out that “I don’t have mileage on the clock these past two years. So if I can get myself back battled-hardened again and match fit, I think my body’s in great shape otherwise”.

“He [Kidney] does know me well, but that’s one thing I did say to him, that I wanted to play every game. I don’t want to be managed. I think the more games I play, the better I get. That’s always been the case throughout my career.

“I think what Deccie is trying to do over there is create a special environment, and try and succeed at some point in the future rather than bringing a load of people together to just try and win big games and not have long-term goals. Hopefully, when I leave there London Irish will be in a better place then when I find it after Christmas.”

O’Brien hopes to buck the IRFU’s unwritten general rule – there have been exceptions in the past – that players who ply their trade outside of Ireland won’t be considered for the national side. He certainly isn’t conceding that this will be his last Six Nations.

“No, I haven’t [thought about this being his last Six Nations] because if I’m fit and well I think I can add value to this group. Even after I leave Leinster I’d hope to be selected [for Ireland].”

He hasn’t discussed the matter with Andy Farrell, who takes over from Joe Schmidt as Ireland’s head coach after the World Cup, and his premise in hoping to elongate his Irish career is based on being fit and playing well; a personal outlook that isn’t corroborated by the national management.

O’Brien is right not to pre-empt being exiled from international rugby even if he must swim against current policy.

He is relieved that his contract “is done and dusted so that I can concentrate on rugby”.

His next assignment is likely to be against Italy in Rome on Sunday, and what he would like more than anything else is that any further discussion on his Ireland career for the remainder of the Six Nations through to the World Cup and beyond centres on his performances on the pitch.