Seán O’Brien admits Ireland need to tidy up their act 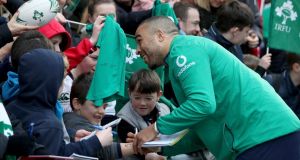 The overwhelming mood in the Ireland camp after the French match appears to be one of quiet satisfaction, laced with an acknowledgment that there was scope for incremental improvements ahead of Ireland’s visit to Cardiff on Friday week.

Seán O’Brien sat out Monday’s open training session – which gave Joe Schmidt’s squad a blow-out against Nigel Carolan’s Under-20s – one of five players to do so. But it’s nothing that a little rest and recuperation at home in Tullow for a few days won’t cure.

The review of the French game is already underway, unearthing aspects of the performance that need polishing, while weighed against the positivity of an excellent result against a big French team.

O’Brien explained: “We’ve had a bit of a look and we probably left some opportunities out there, but overall (we’re) pleased with the result. Our defence was pretty good and (they were) difficult enough conditions.

“We stepped up to the mark but I think there’s more growth in us though and that’s the pleasing thing. Overall you’d have to be happy.

“We got some things right at the weekend and we didn’t get other things right. We were a little bit sloppy in different areas and we lost a few balls at times so if we get those little one percenters it will hopefully add to our game. There are lots of things to tidy up but it will make a huge difference.”

The weather on Saturday was certainly a factor, placing a premium on assured handling and also in dictating the emphasis within the gameplan, particularly in the second half when the conditions deteriorated further.

“Yeah, the ball was very greasy,” said O’Brien. “It never dried up at all throughout the game but we kept our passes a bit shorter and a bit more, low-risk, because the ball was spinning around and there were plenty of handling errors. They were coming at us too, so it made sense to do so.”

O’Brien admitted it was not an ideal gambit to have to take on the French at close quarters. “They’re combative lads. We did well, we had a few nice little half-breaks; we got in behind them at times but we didn’t finish a few opportunities. That’s just the way it went, every international is a battle and the weekend was no different.”

England’s victory over Italy and the furore surrounding the Italians not contesting the rucks came up for discussion. O’Brien was asked if he knew the laws unlike a clearly perplexed England captain Dylan Hartley.

“Yeah, I certainly would have known the rules around it anyway. England dealt with it in the end but in fairness to the Italians they were very clever and smart in the way they went about their gameplan.

“They caught them on the hop probably. There is a free-flow effect on it because the Italians weren’t putting anyone into the breakdown. Once they got a bit of momentum the Italians were hopping off the ground, they got excited and were in the game straight away. That’s what kept them in it until half-time. England did the job in the end.”

O’Brien acknowledged that Wales would be hurting after losing to Scotland at the weekend and that it will take another huge performance under lights on Friday week to sustain Irish ambitions through to the final weekend of the tournament when England come to Dublin.

“It’s (Principality stadium) a great place to play, a massive atmosphere so hopefully we can feed off that and get energy from that, too.”

For now though, it’s about grabbing a little downtime. “They’re (breaks in the Six Nations) important and that’s why they are there. They know what we go through (as players). It’s very important to have a few days off.”

1 James Ryan set for up to 12 weeks on the sidelines
2 Ken Early: Frank Lampard’s problems start at number one
3 The Offload: Schools rugby talk in the Seanad appears tone deaf
4 All in the Game: Klopp gets the last laugh in quiz show
5 Rory McIlroy admits missing the crowds as he looks to end Major drought
Real news has value SUBSCRIBE