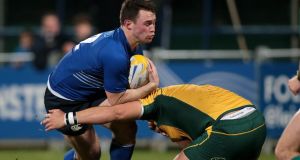 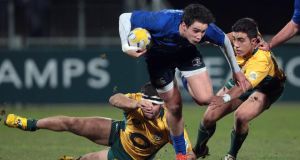 The Leinster Schools showed great resolve and composure to turn an 11-point deficit into a 10-point victory over the Australian Schools at Donnybrook last night.

The Australians had to absorb heavy Leinster pressure early on, but only conceded three points to the boot of outstanding Irish outhalf Seán Kearns in the 18th minute.

They then accelerated out of defence in a classic sucker-punch move. Left wing Adrian Henley’s offload found flanker Douglas McMillan, who was the link in the chain for outhalf Mitchell Third to flash over for the try. His conversion made it 7-3 in the 23rd minute.

Lock Ned Hanigan showed his athleticism off a hard line to wrongfoot the home defence, with Third converting again in the 34th minute to take a 14-3 advantage into the break.

Kearns kicked an important three points when number eight Rohboni Warren-Vosayaco was binned for killing the ball in the 45th minute. The Irish outhalf then came into his own, cutting inside for a terrific try, which he converted in the 50th minute. Captain James Ryan was then on hand to take the ball home for the real game-changer in the 53rd minute, as Kearns extras put them six points clear.

Australia replacement outhalf Andrew Deegan tightened it up with a penalty, but the home side held its composure. Kearns kicked a penalty to the corner and number eight Nick Timoney bumped a defender to make the line, with Kearns converting.