Saint-André under fire as Parra and Fofana ruled out

Injuries come on the back of a wave of criticism from media, ex-players and coaches 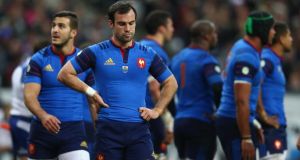 Morgan Parra of France cuts a dejected figure after the defeat to Wales at the Stade France at the weekend. Photograph Michael Steele/Getty Images

Problems continued to mount for the under-pressure France coach, Philippe Saint-André, after the scrum-half Morgan Parra and the centre Wesley Fofana were both ruled out with injuries.

Parra, who plays for Clermont Auvergne in the Top 14, tore the posterior ligament in his right knee during France’s 20-13 loss to Wales on Saturday and will miss the rest of the Six Nations after being ruled out for at least 10 weeks. While he does not require surgery, Clermont said his knee will be immobilised for four weeks and that “his return to competition won’t be possible before 10 weeks”.

Parra damaged his knee in the first half, but kept playing until the 53rd minute, when he was replaced by Sébastien Tillous-Borde, who is expected to take his place in the starting XV.

Fofana suffered a hamstring injury and is expected to miss the next round in Italy with his club, Clermont Auvergne, suggesting a two to three-week recovery timeframe, potentially ruling him out of the final game at Twickenham against England as well.

After Saint-André criticised his own players on Sunday, the 2007 World Cup coach, Bernard Laporte, now in charge of Toulon, compared him to the France football coach Raymond Domenech, who disastrously lost the dressing-room at the 2010 soccer World Cup in South Africa.

The newspaper Le Dauphiné compared the national team to the Titanic, while the former France prop Sylvain Marconnet called for the coach to take responsibility for the poor start to the tournament, with the defeat by Wales following on from the loss in Ireland and a narrow win over Scotland.

Marconnet even called for Saint-André to consider resigning.