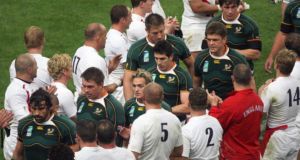 England give South Africa a guard of honour after the Springboks destroyed them 36-0 in Pool A of the 2007 World Cup. Photograph: Getty

In 2007 England came to the World Cup more in hope of defending their crown than with any real expectation.

In the four seasons which had passed since Jonny Wilkinson’s winning drop goal in the 2003 final England had failed to finish higher than third in the Six Nations. The shadow of Clive Woodward was looming large over his successors, with Andy Robinson falling by the wayside before Brian Ashton took the reins.

England had been pooled with South Africa. The two sides had met in 1999, when the Boks dumped England out of the tournament, before England exacted revenge in the group stages on their way to glory in Sydney.

There were survivors from 2003 in both teams, for the Boks Victor Matfield and Bakkies Botha remained the engine room, while Jason Robinson and Josh Lewsey were still England’s creative outlets (Wilkinson was in the squad but, predictably, injured).

But while players on both sides had made it from Perth through to the Stade de France, the night couldn’t have gone more differently.

England were destroyed by South Africa. They had hit some low ebbs since winning the World Cup but this was the lowest as they suffered a record international defeat.

South Africa got off to a whirlwind start, man of the match Fourie du Preez feeding Juan Smith for the game’s opening try after just six minutes. The Boks kept the pressure up, the boots of Percy Montgomery and 20-year-old Francois Steyn, along with a JP Pietersen try, helping them to a 20-0 lead at half time.

While they showed more resilience in the second half, England were impotent, and matters weren’t helped as Jason Robinson limped off with a hamstring injury after an hour.

JP Pietersen went over for another score as South Africa staked their claim to England’s throne, and Ashton’s side failed to score in a game for the first time since 1998.

England left the field battered and humiliated, wondering how to piece their tournament back together. It seemed improbable the two sides would meet again in the final weeks later.