Springboks winger was injured against Canada and aggravated it against Japan 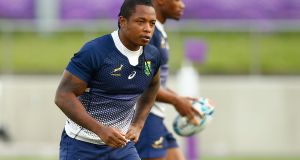 Kick-off: 9am Irish time, Sunday. Venue: Yokohama International Stadium. How to follow: The Irish Times liveblog will begin at 8.30am. On TV: Live on Eir Sport, RTÉ2 and ITV.

Cheslin Kolbe has been ruled out of South Africa’s World Cup semi-final against Wales in Yokohama on Sunday due to an ankle injury.

The Springboks’ star wing suffered the injury against Pool B opponents Canada and then aggravated it during the quarter-final victory over Japan four days ago.

He has been replaced by Sbu Nkosi as a solitary change to the starting lineup that accounted for Japan.

It is a major blow for South Africa, given Kolbe’s renowned game-breaking and try-scoring ability.

He has lit up the World Cup in Japan with some of his performances, and Wales assistant coach Shaun Edwards recently likened his ability to that of England World Cup winner Jason Robinson.

“It’s disappointing not to have Cheslin available as he has been brilliant for us since we first called him up last year,” Springboks rugby director Rassie Erasmus told www.sarugby.net.

“But we really rate Sbu, and he will slot straight in.

“I am as excited to see what he can do as I would be if ‘Chessie’ were playing. Sbu has been very close to selection as it is.”

Erasmus has gone for a split of six forwards and just two backs among his replacements as South Africa bid to reach a third World Cup final.