Ronán Kelleher: ‘I was buzzing off adrenaline and that got me through it’ 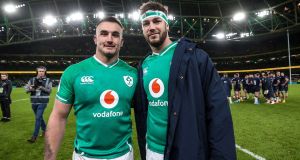 This opening Six Nations afternoon might prove as painful to remember, certainly for Stuart Hogg, as it was gruesome to witness. Muhammad Ali branded concussion the “black lights of unconsciousness” and should Caelan Doris ever need to piece together the three minutes 32 seconds his Ireland debut lasted then Ronán Kelleher can fill in the gaps.

“It was extra special to get my first cap with Caelan,” said Kelleher. “Obviously it was unfortunate what happened to him but still delighted we got it together.”

These newly-minted internationals – who played against each other for Blackrock and St Michael’s in a Leinster Schools Cup match in 2014, a field that also included James Ryan, Joey Carbery and Max Deegan – were only on the pitch for a total of 11 minutes against Scotland.

“He was in good spirits,” said Kelleher of Doris. “Obviously it was worrying at the time, to be fair, but he seems to come through it well. I was chatting to him. He was kind of happy enough. Obviously he was not really aware what’s going on but he’s going well. He was chatting away. His family came in as well. So it was great for the two of us.”

Despite Doris’ condition, tradition was continued in the changing rooms after this 19-12 victory as the families of both young men came into the player sanctuary under the west stand to witness the cap ceremony.

However brief the experience, Doris is now a fully formed Test match animal. He proved as much with 1:30 on the clock when stooping under Scottish bodies to steal possession 10 metres from the Ireland try line. Inside two minutes the 21-year-old was laid flat on his back, legs sprawled in an unnatural way, having clashed heads with Adam Hastings after Iain Henderson’s initial collision ricocheted the Scotland outhalf into him.

It was a wincing collision but Doris eventually regained enough equilibrium to walk gingerly from the field, with disappointment etched across his young but already seasoned face. Later, television cameras showed him talking with understandably worried loved ones.

Of a similar pedigree as Ryan and Dan Leavy, much is expected of Doris, and while he’s yet to earn comparisons to that Grand Slam duo, he now shares a common trait with Paul O’Connell. In 2002, when also 21, O’Connell was knocked out scoring a try on debut against Wales at the old Lansdowne Road. They had to coax the giant lock from the field. These days the treatment of head injuries is more immediate. In fact, it took the Irish medics 10 seconds to reach Doris’s stunned body.

“He had a great steal early doors,” said Andy Farrell, the 44-year-old having made a debut of his own as Ireland head coach. “That’s his type of game … He’ll lick his wounds and be back.”

Farrell is right, Doris will return. How soon is up to the medical team who would be fully aware of another concussion sustained against Treviso last November.

Dave Kilcoyne also suffered head trauma and was carted away not a minute after his arrival for Cian Healy. This forced extra time from Healy and Tadhg Furlong, which placed a heavy toll on the propping department. The utterly heroic Furlong was helped ashore on 77 minutes with tight calves.

Kelleher was already five minutes and two bruising tackles into his new life in the most strenuous environment imaginable. As Scotland pounded away at the green try line, the 22 year old kept putting his shoulder to the wheel.

“I was buzzing off adrenaline and that got me through it,” said the physically imposing hooker. “It was attritional, tough and pretty quick but we did well to dig in.”

Bashed bodies, rattled brains and plenty of relief - all part of the modern international game as Kelleher and Doris are learning the hard way. There is no other way.