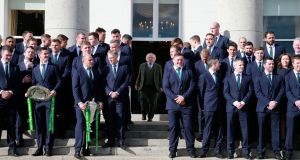 President Michael D Higgins walks out to greet the Ireland team, staff and partners at Áras an Uachtaráin on Wednesday. Photograph: Nick Bradshaw

President Michael D Higgins hosted a reception in honour of the Grand Slam winning Irish rugby team at Áras an Uachtaráin on Wednesday evening. It was the third time in the modern era that an Irish squad had been invited to the Phoenix Park, following on from the 2009 Grand Slam and prior to the 2011 World Cup.

President Higgins welcomed 27 players who featured in the five matchday squads, as well as the backroom and support staff, and wives and partners, for individual photographs as well as a squad photo outside Áras an Uachtaráin on a sunlit evening.

Fittingly, first to pose with the President was the most important man in Irish rugby, Joe Schmidt, with the Triple Crown trophy, before captain Rory Best did so with the Six Nations trophy. Just as fittingly the last to do so was one of the squad’s physios, Willie Bennett, also the longest serving member of the backroom, having started before Ireland’s win over Fiji at the old Lansdowne Road in 1995.

In his speech to all of those in attendance, the President welcomed them to Áras an Uachtaráin “to honour your magnificent achievement in winning the greatest prize in European rugby, an Caithréime Mhór, the Grand Slam.”

The President rarely misses a match at the Aviva Stadium, although he acknowledged that “on those occasions many of you have other things on your mind.” The weather had conspired against him meeting the squad on their return from completing the Grand Slam with the victory over England on St Patrick’s Day, and his duties also prevented him from attending the game in London, when “your victory added greatly to our national celebrations and made that day truly unforgettable.”

That “truly monumental achievement”, he said, is “also a testament to what has been, and continues to be, a golden era of Irish rugby.” Also noting the women’s Grand Slam in 2013, he said “it is heartening to see women’s rugby growing in popularity.”

President Higgins also saluted Peter O’Mahony’s “act of exceptional kindness in giving his Grand Slam medal to a young Ireland fan in Twickenham that day. I know how appreciative you are, as a team, of the support you get from the Irish public and how you all show that by making yourselves available to supporters and to the public in your everyday lives.

“Peter’s act was symbolic perhaps of how we can use our positions in public life to acknowledge our dependence on each other, and through such acts, how we can inspire consideration, empathy and, that perhaps old-fashioned, but perfect word – kindness to those around us.

“I would like to commend each of your families, partners, loved ones, teachers and coaches who, as each of you knows best, played such an important part in your journey. I am so pleased to see so many of your partners here this evening – you are most welcome.”

He also paid tribute to Schmidt – “the mastermind of this campaign” – and looking ahead to the European Champions Cup final in Bilbao, concluded by saying: “May I take this opportunity to wish those of you travelling to Bilbao for the 12th of May the very best of luck.”

Hopefully, it won’t be the last time he does.