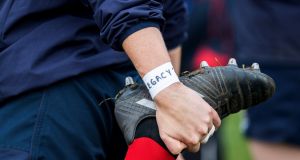 A view of a ‘Legacy?’ wristband worn by players during Old Belvedere’s match with Blackrock on Sunday. Photograph: Oisin Keniry/Inpho

Rugby Players Ireland (RPI) are to represent the women’s national squad in their dispute with the IRFU.

This follows a letter from the Ireland squad to RPI, signed by 33 players, expressing concerns about the governing body’s “lack of respect and ambition” for the women’s game.

In reaction to the “#legacy?” wrist band campaign, which took place in Ireland and England over the weekend, IRFU chief executive Philip Browne initiated a meeting with RPI chief executive Simon Keogh on Monday.

RPI, previously only linked to female amateur players on a support basis, are now mandated to speak and negotiate on their behalf.

“Simon Keogh today met with Philip Browne on a number of issues, including the representation of the Women’s XV,” said an RPI spokesman.

“In that discussion the IRFU was informed that a number of the women’s squad have come together to request that Rugby Players Ireland act on their behalf going forward. We could not automatically adopt that role without a formal nomination by the player group. This request currently sits with the IRFU.

“We are hopeful that by providing the players with a collective voice, we will provide a conduit to the IRFU and also prevent any further disharmony.”

An IRFU spokesman described the meeting as a "routine catch up."

RPI receive significant funding from the IRFU. Keogh, a former professional with Leinster and Harlequins, replaced Omar Hassanein as chief executive of the players body in August.

“Communication with the IRFU has been a long-standing problem right across the board,” said a current Ireland international, speaking to scrumqueens.com, who choose to remain anonymous due to concerns about future selection. “We’ve fed that back plenty of times but there seems to be no sort of resolution to it.

“Information isn’t shared and the way they advertised the coaching role is frankly just very naive considering the issues we had back in March when players were pulled out of the 15s squad to play Sevens in the middle of the Six Nations. That was a significant issue for the 15s players and no lessons have been learned. Its insulting.

“When we ask questions we don’t get answers,” she continued. “They seem to answer fundamental questions through issuing press releases rather than actually talking to us. The players understand its a Sevens year [2018 World Cup in San Francisco] and there was likely to be more focus on that so if the communication had been handled better we probably wouldn’t be where we are today. “

Another player stated: “We’ve had feedback from the union recently about the fact that we are not athletic enough but it is even more frustrating when we were told that our strength and conditioning programme wouldn’t begin till December. While other teams are playing test rugby in [November], we are just working on our own, with no coach, no games and no dates.”

There is also a looming schedule clash between a full round of AIL matches and the Ireland camp, for 15 aside and Sevens players, on November 18th and 19th.

The IRFU are seeking a “part-time casual” coach on a “six-month contract” to assist Sevens and women’s director of rugby Anthony Eddy with the 15 aside’s Six Nations campaign that begins on February 3rd against France in Toulouse.

The IRFU position is that a full-time professional coach will be appointed “if necessary.”

Ireland captain Claire Molloy, along with other players, has stated a full-time coach is essential if they are to remain competitive with other leading rugby nations.

Since winning the Six Nations in 2015, Ireland have slipped from third to ninth in the World Rugby rankings.

RPI development manager Nancy Chillingworth has worked previously with the women’s team on an individual basis.

1 Seán O’Brien: Anger over my parents’ break-up never left me
2 Madness or defiance? The GAA is taking a huge gamble in staging Championships
3 Sportsman to statesman, Marcus Rashford is a ray of light in the darkness
4 All in the Game: Klopp’s Amsterdam subs don’t go down well
5 Plenty of positives for Farrell as Ireland hit the ground running
Real news has value SUBSCRIBE

Rory McIlroy aiming to cut out the mistakes with Augusta looming 12:52
Sportsman to statesman, Marcus Rashford is a ray of light in the darkness 12:29
Patrick Cantlay takes Zozo Championship after late ambush 11:10
John Cooney called into Ireland squad for France clash 10:58
All in the Game: Klopp’s Amsterdam subs don’t go down well 10:00
Crossword Get access to over 6,000 interactive crosswords