Peter O’Mahony out of the Rugby World Cup 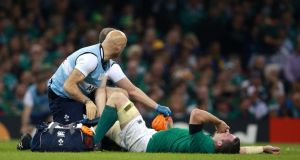 Peter O’Mahony has been ruled out of the rest of the World Cup with knee ligament damage as Ireland continue to count the cost of yesterday’s bruising 24-9 win over France. Paul O’Connell is not expected to play any further part in the tournament either, bringing the Ireland captain’s stellar Test career to a premature end.

O’Mahony left the Millennium Stadium in a knee brace and on crutches and subsequent tests have revealed ligament damage.

O’Connell underwent scans on his hamstring injury overnight and while the team management await those results it is almost inconceivable that he will recover in time to have any other part to play.

“Paul O’Connell appears to have suffered a significant hamstring injury and was hospitalised overnight, he’s having scans later today to clarify the extent of the injury,” said Mick Kearney. “Peter O’Mahony has suffered a knee ligament injury and is returning to Dublin today for specialist opinion and will take no further part in the tournament. Johnny Sexton suffered a groin injury, initial clinical assessment is encouraging and we await scanning later today.

“After an incredibly physical encounter a host of players are reporting bumps and soreness and will have to be managed, but nothing more serious than that,” continued Kearney. “As soon as we have more clarity on the injury front we will be in a position to make decisions on replacement players.

“At the moment definitively only Peter O’Mahony has been ruled out. Paul was in hospital overnight and he was obviously very sore. In relation to Jared Payne’s replacement that’s similar too. I’d be pretty sure that a decision would be made later today. The coaches did meet this morning and discuss a number of different options.”

“I felt awful for him,” Rob Kearney added of O’Connell’s injury. “But it was great to see the sheer delight on his face after the game. It’s a great sign of the man that he was able to put his own woes behind him and think of the team’s achievement first.”

Ireland will face now Argentina in the World Cup quarter-finals on Sunday without O’Mahony and their skipper, while Joe Schmidt’s side Ireland could also be without Johnny Sexton Sean O’Brien if injuries and disciplinary concerns all fall the wrong way.

Sexton’s groin problem could yet ease in time for him to face Argentina, but flanker O’Brien will be left to sweat on whether tournament discipline bosses opt to cite him for an alleged punch on France lock Pascal Pape.

Ireland’s memorable win at the Millennium Stadium secured Ireland a quarter-final on the same ground next Sunday against Argentina, enabling Ireland to sidestep the reigning world champions New Zealand, a side Ireland have never beaten in 110 years.

Subdued so far, the All Blacks must now face the one team that truly spooks them, France, on the same ground at the same stage of the tournament as New Zealand’s famous World Cup loss to France in 2007.

Second-half tries from fullback Rob Kearney and scrumhalf Conor Murray sealed a win the Six Nations champions fully deserved. France, with skipper Thierry Dusautoir and number eight Louis Picamoles leading from the front, tackled like demons but were almost devoid of any creativity in the backs and never looked like crossing the Irish line.

The roof of the Millennium Stadium was closed but the green-clad fans in the crowd of 72,163 nearly took it off with a passionate rendition of “Ireland’s Call” and the Irish players responded by tearing into the early exchanges. Twice Sexton kicked Ireland ahead but twice France fullback Scott Spedding levelled the scores from long range, the second penalty from a metre or two inside his own half.

In the 24th minute, though, Sexton pulled up gingerly after a tackle and had treatment on his groin. A minute later his game was over after Picamoles smashed into his ribs. Sexton’s replacement Ian Madigan put Ireland 9-6 ahead with his first attempt at goal and almost set up the first try of the match when his pass sent winger Tommy Bowe through a gap in the defensive line.

Bowe charged 40 metres towards the remaining French defender and got his pass away to Keith Earls, only for the outside centre to spill the ball with the line at his mercy. The first half looked set to come to a close without further incident when lock O’Connell failed to get back to his feet after a ruck and had to be carried from the pitch on a stretcher.

Ireland moved further ahead in the 50th minute when, after a scything break from centre Robbie Henshaw had taken Ireland to the French line, Kearney crashed through Freddie Michalak and touched down.

The celebration was deafening but subsided into supportive applause only a few minutes later when O’Mahony caught his studs in the turf and twisted his leg.

French replacement Morgan Parra cut the deficit with their third penalty but Ireland then pulled further ahead when the pack forced their way to the France line and Murray touched down on the padding of the post. Madigan added the extras and slotted another penalty three minutes from time to seal the victory.