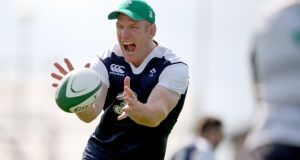 Paul O’Connell clarified that while his decision to sign for Toulon represents an exciting opportunity to pen a new chapter in his career, the World Cup will provide the epilogue to his international days.

Ireland’s last game in the tournament, at whatever stage that may be, will be his final appearance in a green jersey, before he embarks on what is in effect an 18-month contract with the three-time European champions. There will be no extension in an Irish context; he’s made his decision.

Speaking at the launch of the new Irish RWC jersey following an opening training session in Galway, he said: “The World Cup will certainly be the end of my Irish rugby career. I will say never. I’m really looking forward to the World Cup but this is going to be the end of my time playing for Ireland.”

He also elaborated on his decision to move to Toulon.

“For me, it is a chance to do something different. I’d say for two years I have been fairly sure that I was going to retire . . . It has been a done deal in my head that I would be retiring after the World Cup from both Munster and Ireland.”

Occasionally those thoughts were infiltrated by a brief desire to play on. Those moments usually passed but his head was turned by a phone call from a friend, Paul Stridgeon, a former strength and conditioning coach with England and the Lions, who has performed the same role for Toulon for the past year and for Wales since the start of the month.

The English man had seen a story linking O’Connell with Pau – the Irishman never spoke to or heard anything from the French club – and asked would he be interested in moving to Toulon.

The Munster secondrow explained: “I said, ‘give me a bit of time and I’ll get back to you.’ I actually got back to him after Christmas and said, ‘look, it is not for me. I am going to fully retire after the World Cup.’ I was very happy with that decision.

“Once I told him that there was a small bit of regret that snuck in. About a month or five weeks later I got another text that they [Toulon] were about to move on another player and asked again would I be interested and to let them know.

“I chatted with Emily [his wife] a little bit about it. The body at the time was feeling really good.

“I just said to them, ‘look, I would be interested but I can’t talk to a club while I am playing for Munster but if you are willing to wait until the summer, I’ll certainly talk to you and look at doing something.’

“That was basically it. I went down about two weeks after the Pro12 final and agreed to join them.

“Whatever I do after rugby, whether it’s inside or outside rugby, I’ll be better at it for having done it. It is just an opportunity to do something different. Emily was really eager to do it. The kids are a good age for it.

“Obviously it’s a very different club to a lot of clubs in Europe. It was a great opportunity for me from a rugby point of view and a lifestyle perspective to experience something.

“If they [Toulon] had moved on I would probably have gone somewhere else [in France]. Even with the IRFU, and when I spoke to them and said, ‘if this is an issue, I’m actually very happy to retire’. I didn’t want to cause trouble. I know this is a situation where it is going to be a battle for them holding on to players and me going to Toulon probably isn’t ideal for them. As I said earlier, I am very grateful to them for doing that.”

O’Connell will firm up a fortnight’s break after the World Cup with his club but there are no other preconditions in regards to game time.

“I don’t have anything in my contract around getting every second Saturday off. They have a very big squad and they look after their older players very well over there. Chatting to Nathan Hines, he said one of the things that helped him play on was retiring from international rugby.

“On those autumn and Six Nations windows you get the time to rest up a little bit. That’s what I would be hoping to do.”

He said he had spoken to Jonny Sexton about life in France but the most persuasive influence was Emily; that, and the opportunity to challenge himself on the pitch one final time.

There are likely to be a few twists and turns to the narrative yet.