Over 1 million people watched Ireland beat All Blacks on RTÉ 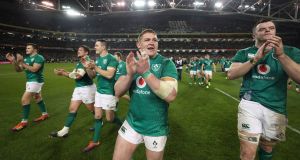 RTÉ2 received a 57 per cent share of people watching television on Saturday evening for Ireland’s first ever victory over the All Blacks on home soil with an average of 883,700 tuning in.

At the very end of the game when Ireland sealed victory there were just over 1 million people watching while the RTÉ Player showed 135,000 streams of the match over the whole weekend.

The TV figures are slightly above the number who tuned in to watch Limerick end a 45-year wait for the All-Ireland senior hurling title in August.